AppleInsider
Posted: March 30, 2020 11:25AM
in General Discussion edited March 2020
A new report into Foxconn's financial situation suggests that it isn't the "iPhone 12" at risk for a later than expected release, but Apple products currently in development for future years will be affected by the COVID-19 outbreak the most. 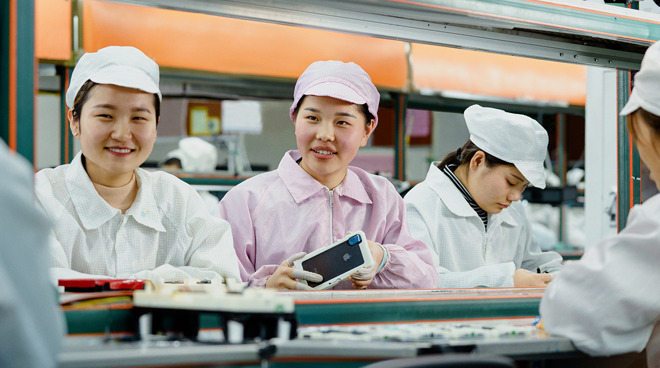 Line operators at an iPhone production facility in China, photographed in 2018. (Source: Apple)

Following mixed reports claiming that the "iPhone 12" may be delayed by months because of the coronavirus outbreak, a new report backs up the idea that it will launch on schedule -- but adds that it's future products that will be delayed.

According to Bloomberg, sources say the forthcoming 5G iPhones will move into mass production this summer after having been developed over several years. It's that years-long development, however, that means future devices will see the impact of the coronavirus.

Bloomberg's report concentrates on the financial situation of iPhone supplier Foxconn, and repeats previous details of how the company has seen profits fall even before the COVID-19 outbreak. This was due to weaker demand for Apple products, and those of other clients, plus the US/China trade tensions.

Apple reportedly accounts for around half of Foxconn's revenue, and the company claims to now be back at full production. It's done so in part by raising signing bonuses for new workers.

Foxconn has previously seen profits rise and fall quite markedly, with a particular rise at the launch of Apple's iPhone X. It also predicted a problematic 2019, to the extent that it undertook drastic cost-saving measures.

Subsequently, the coronavirus has had an immediate impact with the company seeing its biggest revenue drop in seven years because of the outbreak.