AppleInsider
Posted: April 2, 2020 2:25PM
in General Discussion edited April 2020
The Federal Communications Commission has drafted rules that would permit unlicensed devices to operate across the 6GHz band, a move that could increase the bandwidth, speed, and efficiency of consumer Wi-Fi and the devices that connect to it. 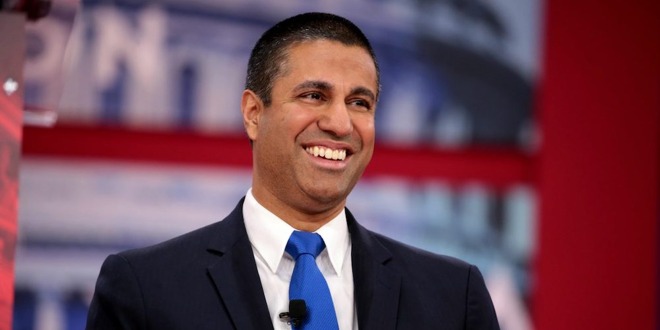 FCC Chairman Ajit Pai drafted new rules to allow consumers and other unlicensed operators to use the 6GHz band.

The proposal floated on Wednesday by FCC Chairman Ajit Pai will make available all 1,200 megahertz of the 6GHz band for unlicensed applications. The FCC is slated to vote on it by April 23.

Currently, the 6GHz band is only available for licensed uses, such as wireless backhaul in the telecom industry and electronic newsgathering (ENG) for broadcasters. Unlicensed use would be everything else, including Wi-Fi routers and smart home devices.

The FCC says that opening up the entire band could "increase the amount of spectrum available for Wi-Fi almost by a factor of five."

"This is would be a huge benefit to consumers and innovators across the nation. It would be another step toward increasing the capacity of our country's networks. And it would help advance even further our leadership in next-generation wireless technologies, including 5G." the announcement reads.

Pai's draft report and order would authorize two different types of unlicensed use: standard-powered applications in 850 megahertz of the band, and indoor, low-power application over the full 1,200 megahertz.

While some broadcasters have expressed concerns about interference to the FCC, the Commission says that it will implement an "automated frequency coordination system" to prevent certain access points from operating where they'd cause interference to licensed operators.

"From Wi-Fi routers to home appliances, Americans' everyday use of devices that connect to the Internet over unlicensed spectrum has exploded," Pai said. "That trend will only continue."

Wi-Fi advocates have argued that currently available bands, 2.4 and 5GHz, won't be able to support projected demand. Many device makers, like Amazon and Apple, are even eyeing the band for new devices like wearables and augmented reality headsets, Fierce Wireless reported.

What this means for consumers

The 6GHz band has more than twice as much bandwidth as the current 5GHz band used by many Wi-Fi devices today, with broader support for super-wide channels. Since older Wi-Fi devices can't connect to it, latency and interference should be lower in the new spectrum, too.

Since 6GHz devices would use need to support Wi-Fi 6, they'd also share the speed and efficiency upgrades of the next-generation wireless standard.

In other words, devices equipped to take advantage of the new spectrum will benefit from faster connectivity, more bandwidth, lower latency and a more reliable connection. It's better Wi-Fi across the board, making it particularly well-suited for low-power IoT applications or tech like augmented and virtual reality.

It will take time for devices with support for the 6GHz band to roll out. While Apple's latest slate of iPhones sport Wi-Fi 6 support, that standard only uses the 2.4GHz and 5GHz spectrum. It's Wi-Fi 6E, currently unavailable to consumers, that will be able to take advantage of the new spectrum.

The Wi-Fi Alliance said in January that Wi-Fi 6E will likely arrive on consumer wireless access points and smartphones first, followed by enterprise hardware. Many device and component makers are eyeing a release in the second half of 2020.

Although Apple doesn't currently have a Wi-Fi 6E device, and there aren't any reports suggesting that one is on the table, it's likely that we'll see iPhones and other products equipped to take advantage of the new band in the near future.

Apple's last stable of iPhones quietly introduced Wi-Fi 6 support without much fanfare. Based on the fact that chipmakers are already looking to ship Wi-Fi 6E chips in the second half of the year, it's probable that Apple's rumored "iPhone 12" will also be able to support the new band.

The FCC also lists augmented reality (AR) and virtual reality (VR) as key potential applications of Wi-Fi 6E. Of those two, it's also pretty clear is Apple has its sights set on bigger applications for AR over the next couple of years.