AppleInsider
Posted: April 4, 2020 12:21AM
in General Discussion edited April 2020
Amazon's Prime Video app now features in-app rentals and purchases across Apple's platforms. While that's new, there's much more to the story -- including the previously obscure Apple initiative that allowed it. 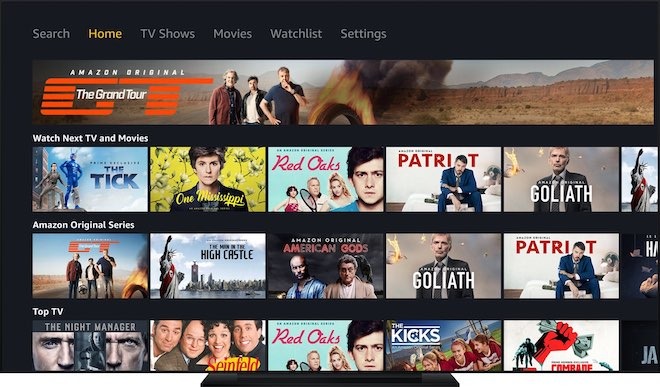 The change applies to all of the Prime Video apps for Apple platforms, including on Apple TV.

The new purchase behavior is not, as was previously speculated, Amazon skirting Apple's 30% in-app purchase. Instead, it's actually the result of a new Apple program that greenlights first-party handling of transactions for certain video streaming apps. Here's how it works.

Apple's in-app exemptions, which the company revealed to AppleInsider on Wednesday, come as a surprise to many Apple users. But the feature has actually been around for a while.

According to a statement from Apple, the company has been offering similar exemptions through an "established program" on in-app purchases for smaller and international services like Altice One and Canal+. However, many are only now finding out about the program thanks to Amazon's recent addition.

But there's a bit more to the program, and Amazon's new content behavior, that you should know about.

If you are a Prime subscriber 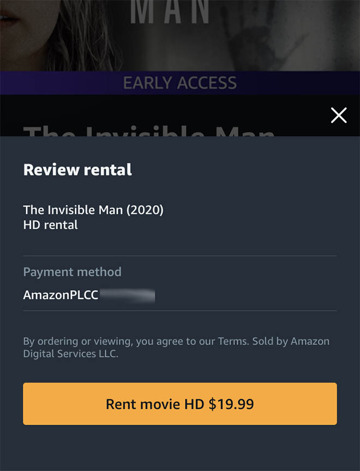 If you're a current Prime subscriber, Amazon will simply charge the credit card you have on file.

Current Amazon Prime subscribers will be able to log into the Prime Video app with their credentials and start purchasing or renting video content immediately.

Instead of routing payments through Apple, Amazon will simply charge your credit card that they already have on file.

These transactions are handled directly by Amazon, so they don't touch Apple's typical in-app purchase guidelines or features at all. While you're technically making a purchase in an app, it's not really an App Store in-app purchase at all.

As we mentioned, this behavior is only sanctioned by Apple because Amazon is a "premium content provider." So don't expect other types of services, like Spotify, to offer similar in-app purchases.

If you aren't a Prime subscriber

In other words, if you try to buy or rent a film with your non-Prime Amazon account, that transaction will count as a standard App Store in-app purchase. Apple will handle it, and take 30% of the amount as part of its cut.

And, interestingly, if you head to Amazon's website, you'll see the payment method for your Prime Video subscription as iTunes. Amazon doesn't appear to be bumping up the price of any Apple-managed subscriptions, though.

Note that this is true even if you have an existing Amazon account with payment options on file. The first-party purchases are only available to Prime subscribers.

Be careful with your Amazon Prime subscriptions 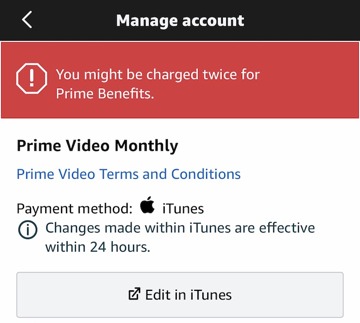 Luckily, Amazon will warn you before double charging you for Prime benefits.

This does bring up another point about the new partnership: you may get charged twice, if you aren't careful.

If you sign up for the second type of subscription through Apple, but then later on, sign up for full Prime, you won't get any sort of discount. In fact, you'll simply be charged the full amount for both.

Because of that, if you want full Prime -- which includes the video benefits -- we recommend canceling any subscriptions made through Apple before signing up on Amazon's website.

Where will Apple go with this?

Amazon is one of the larger video providers on the market today, and its inclusion in Apple's established program likely heralds things to come.

With Apple wanting to expanding its first-party content offerings alongside third-party content curation, it makes sense for the company to play nice with the other big names in the streaming industry.

And other premium content providers could stand to benefit by getting to keep the entire cost of in-app transactions.

Of course, how many partners will be added to the exemption program, and who exactly they might be, still remains to be seen.