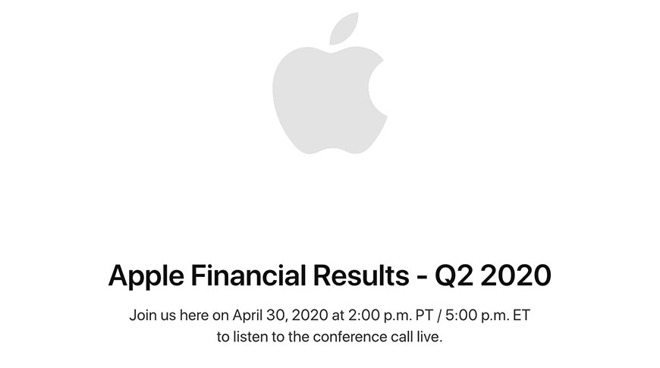 Announced in an update to Apple's Investor Relations webpage, the forthcoming call is scheduled for Thursday, April 30, at 2 p.m. Pacific, 5 p.m. Eastern.

As usual, Cook and Maestri are anticipated to deliver detailed segment financials for the three-month period ending in March, including a look at extended iPhone 11 and iPhone 11 Pro performance. More importantly, the executives will be able to shed more light on Apple's response to the COVID-19 pandemic, which largely spanned the quarter.

In February, as the full extent of the virus was beginning to materialize, Apple revised down quarterly estimates, saying constrained iPhone supply and lower-than-expected China demand would exert downward pressure on the company's earnings. Apple promised to provide more information on the coronavirus and its impact on the tech giant's core businesses in the upcoming call.

Apple pulled in a record $91.8 billion in the first quarter, beating both its own guidance and Wall Street expectations on strong iPhone 11 sales.