AppleInsider
Posted: April 8, 2020 1:17AM
in General Discussion edited April 2020
Apple's effort to develop a standardized format for one-time passcodes sent through SMS messages is moving forward with the help of Google engineers, as the proposal this month garnered official status as a Web Platform Incubator Community Group (WICG) specification draft. 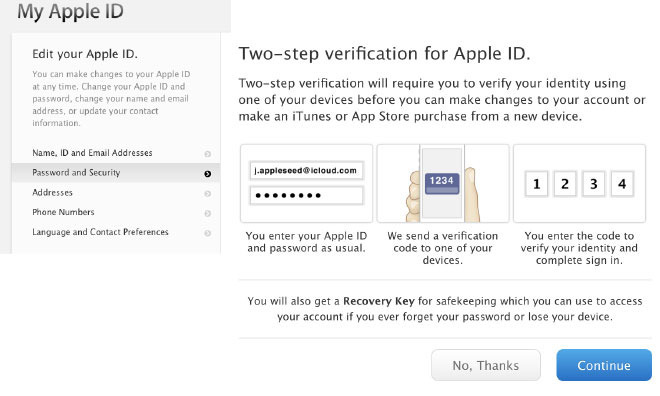 Apple previously relied on two-step verification for Apple ID before moving to a two-factor protocol.

Announced in an updated GitHub explainer, an initial report of Apple's "Origin-bound one-time codes delivered via SMS" project was published by the WICG on April 2. The draft was co-edited by Theresa O'Connor from Apple and Sam Goto from Google.

First proposed by Apple WebKit engineers and backed by Google in January, the initiative seeks to simplify the OTP SMS mechanism commonly used by websites, businesses and other entities to confirm login credentials as part of two-step authentication systems.

While many websites and online services use OTP over SMS, a standardized method of formatting incoming messages text does not exist. As such, "programmatic extraction of codes from [SMS messages] has to rely on heuristics, which are often unreliable and error-prone. Additionally, without a mechanism for associating such codes with specific websites, users might be tricked into providing the code to malicious sites," the WICG publication notes.

Currently, users must manually input provided passcodes into a text field on a host website. Apple wants to push the status quo with a more refined solution that would also provide a higher degree of security.

Using a "lightweight text format," the proposed format embeds an actionable one-time code in an SMS message and links that code to an originating URL. The recipient system can then extract the code and log in to an associated website automatically.

ZDNet reported on the WICG development on Tuesday.

Publication as a WICG specification draft does not necessarily mean Apple's protocol will see mass deployment, but it does show the project is moving forward.
«12»