Apple locks down 'The Shrink Next Door' comedy starring Paul Rudd, Will Ferrell

AppleInsider
Posted: April 23, 2020 7:59PM
in General Discussion
Apple has landed a new eight-episode limited comedy series starring Will Ferrell and Paul Rudd that will debut exclusively on its streaming platform. 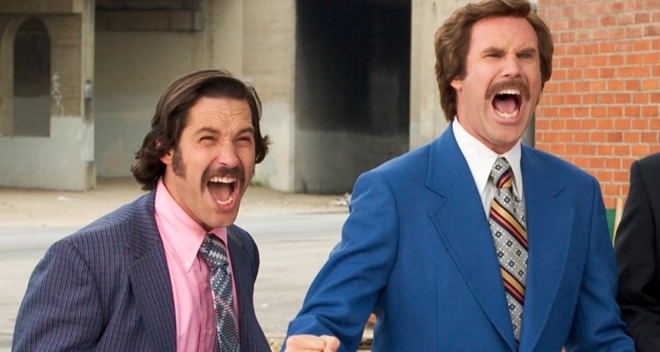 Paul Rudd and Will Ferrell, seen here in "Anchorman," will appear onscreen together again in Apple TV+ exclusive "The Shrink Next Door."

While production on most Apple TV+ shows has paused during the ongoing coronavirus pandemic, the Cupertino tech giant is still negotiating the rights to new content for its streaming platform.

Apple TV+'s latest acquisition, "The Shrink Next Door," is based on the popular 2019 podcast of the same name. It's described as a "dark comedy inspired by true events that detail the bizarre relationship" between a psychiatrist and longtime patient.

"The series explores how a seemingly normal doctor-patient dynamic morphs into an unprecedentedly exploitative relationship filled with manipulation, power grabs and dysfunction at its finest," Apple said in a news release.

Rudd will play "psychiatrist to the stars" Dr. Isaac "Ike" Herschkopf, while Ferrell will play his longtime patient, Martin "Marty" Markowitz. Notably, this is the duo's first onscreen appearance together since 2013's "Anchorman 2: The Legend Continues."

Apple has given a straight-to-series order for the show after negotiating in what it called a "highly competitive situation."

The show is being directed by Michael Showalter, known for "The Big Sick" and "The Lovebirds," and is based on a script by Emmy-winning writer Georgia Pritchett of "Succession" and "veep."

It's being produced by Civic Center Media, along with MRC Television, Gloria Sanchez Productions, Semi-Formal Productions, Wondery and Bloomberg Media. Rudd and Ferrell will also executive produce the series.