AppleInsider
Posted: April 28, 2020 12:22PM
in General Discussion
The long-rumored Apple Car may include displays and indicators that are hidden within the car's interior by special covering layers, while another design for its sunroof suggests the panel could change translucency when it is opened. 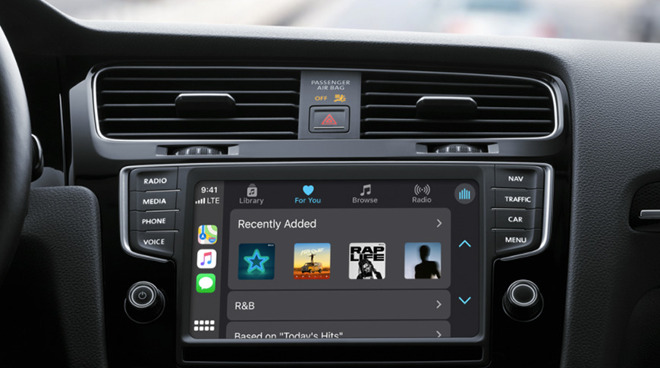 Apple is anticipated to be working on its own vehicle, with the myriad of Apple Car rumors over the years perpetuated by a steady stream of patent filings in the field. As with those issued in the past, Apple is seemingly coming up with radical redesigns of fairly standard elements used in vehicle design, which could result in an extremely modern car upon its eventual release.

One patent granted to Apple on Tuesday by the United States Patent and Trademark Office titled "Cosmetic integration of displays" proposes it would be possible to change how displays appear within a vehicle. Typically used for navigation systems and media playback, current displays are fairly obvious in their placement in a vehicle, but Apple suggests they could be hidden.

At its core, Apple suggests the use of a covering layer for a display that hides it from view as part of the general design of the vehicle. The cover could include a number of elements, such as force and touch sensors for accepting input, and electronic shutters. 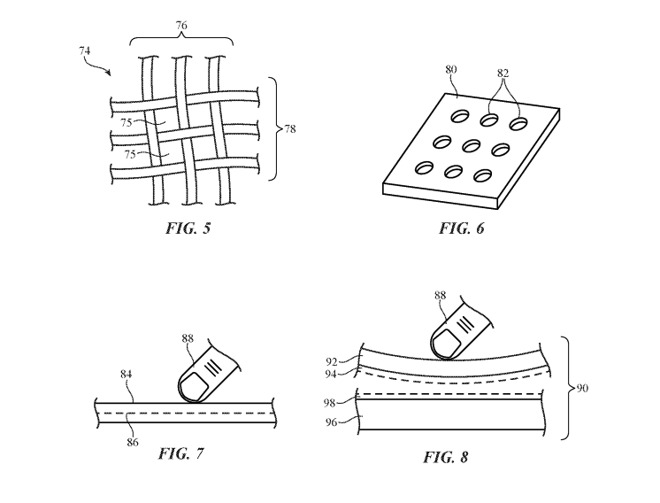 A variety of covering materials and perforations for displays

The cover itself could be coated to appear to be made from leather, fabric, wood, plastic, metal, fiber-composite materials, and other substances, indicating the idea would work for a wide variety of vehicle interior designs. Crucially, the cover would allow light through, either by using extremely thin layers of the externally-covering material, or by including perforations.

Haptic feedback could be provided using actuators connected to the covering layer, while touch sensors would overlap the display within the same layer. It is suggested these elements could take advantage of the covering material's properties as part of their installation, such as by using conductive strands for a fabric-based cover.

The shutter could be combined with a light modulator to serve as a background layer for a transparent display, giving the assembly another way to manage if light is passing through to the cover layer or not. 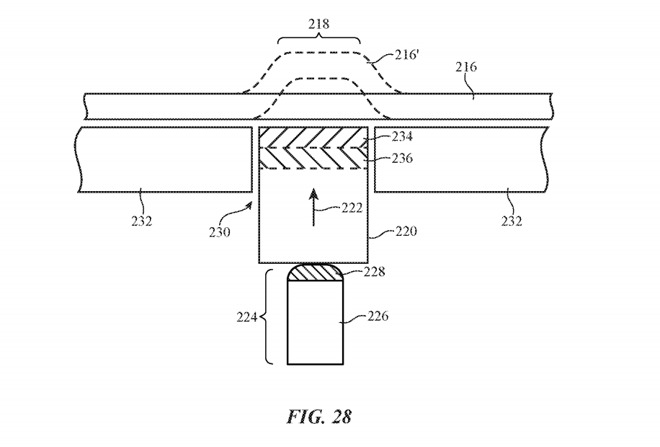 An illustration of a movable button deforming a cover

Physical controls could also be offered as part of the display, at least for flexible coverings, by the use of a movable button. The mechanism could push the button forward, allowing it to protrude the material outward and alert a passenger to its position.

The patent lists its inventors as Romain A. Teil, Jack J. Wanderman, Dominic P. Cincione, and Sawyer I. Cohen.

This is not the first time Apple has suggested disguising indicators as part of a car's design. Proposals for a smart seat includes embedded displays that could tell passengers how to use its features or to buckle up, while fiber optic loops could offer indicators that light up, but then become practically invisible in the car's interior panels when not in use.

A second patent for "Movable panel assemblies" deals with the sunroof of the vehicle. This is well-worn territory for Apple, but the version offered in the patent is closer to conventional sunroof design than previous efforts.

In this latest version, Apple offers a few tweaks that could improve the overall design.

In one version, there is the proposal of the sunroof window having a variable translucence area that is controllable. The panel would be able to switch between different transparency states based on the movement of the panel, such as by becoming more transparent when opened and opaque when closed.

A third iteration could have the roof sporting an opening, one that could again switch between open and closed positions. The opening in the roof would have a cover that could open up to allow the sunroof in when needed, so that it could slide into the roof itself, but otherwise would enclose the roof cavity.

A previous patent bearing the same name suggested a more radical sunroof system, consisting of a roof with multiple panels capable of fitting flush with the rear and front roof sections. Fitted on tracks, the panels could be slid back and forth, tilted forward and backwards for stacking purposes, or could even be brought within the vehicle interior.

Another sunroof patent titled "Movable panels on nonlinear tracks" offered the idea of a large sunroof sliding backwards along a car roof. The key element of the patent is that the sunroof would stay positioned on the center line of the car, despite rails for the panel potentially diverging along an angular car body.

Apple files numerous patent applications on a weekly basis, but while the existence of a filing indicates areas of interest for Apple's research and development efforts, it does not guarantee the concepts described will appear in a future product or service.