Apple Car may have radical airbag designs for passenger safety

AppleInsider
Posted: May 12, 2020 12:06PM
in General Discussion
Apple's rumored car could have airbags built within the seatbelts and ceiling cavities for protection in an emergency, a design that could help ensure the safety of passengers when the seats are positioned to face each other. 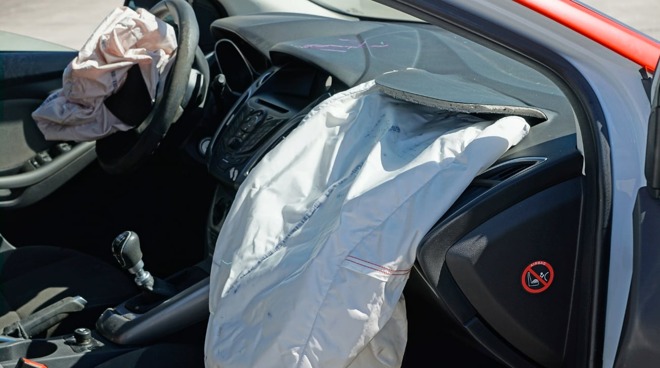 Apple has, for quite some time, been rumored to be working on its own self-designed vehicle. As part of the supposed Apple Car's creation, Apple has come up with a variety of designs to change the way people drive, including alterations to sunroof and door designs, as well as various interior elements.

As part of this massive rethink, Apple has also considered the prospect of people being sat in unconventional ways. While cars typically have their seats facing one way, Apple's self-driving vehicle system could potentially allow all of the seats to face the middle of the vehicle, as if it is a room and everyone is able to talk to each other.

This change in arrangement also requires a fundamental rethink of safety systems employed in the vehicle to keep the passengers safe in the event of a collision. With the standard arrangement, there are places that airbags can be installed to keep the driver and passengers from hitting parts of the vehicle, or overextending their bodies in post-crash movements, with seat pillars and even the dashboard itself offering places to stow airbags.

For Apple's potential room-on-wheels approach, these same locations may not necessarily be available to perform the same task.

In a patent granted by the US Patent and Trademark Office on Tuesday titled "Occupant safety systems," Apple attempts to answer that very problem by using a number of different elements.

When an imminent collision is detected, Apple suggests the use of a deployable cabin divider that has extendable side arms and extra blocking material. As demonstrated in patent images, this could take the form of an inflatable barrier that slides between the passenger and a window.

The extendable side arms are a way to limit the motion of the passenger in an impact, popping out from the window barrier in front of the person. As in a crash passengers are thrown forward but held in place by a safety restraint, putting an inflatable section in front of them restricts their range of movement. 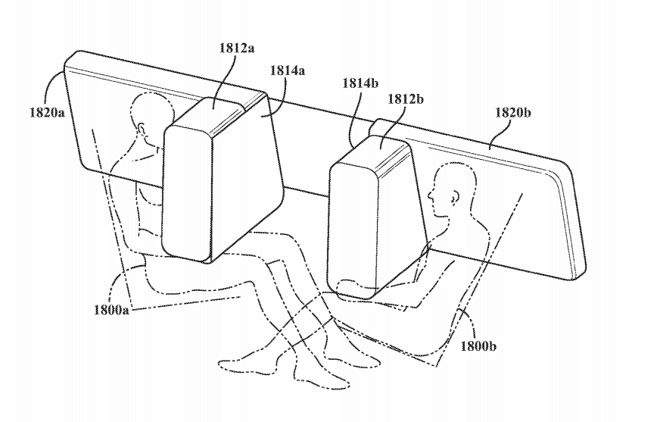 The concept is also offered in simpler ways, such as simply having a large airbag deploy from the cabin ceiling directly in front of where the passenger is sitting, with the inflatable block again restricting movement and cushioning the impact. This can even be offered in the from of an in-seatbelt version, using an airbag deployable within the safety restraint around the passenger's waist, again deploying into a large inflatable block.

In the case of the belt and ceiling-deployed inflatable blocks, a cabin divider can still be used, though more to prevent extended shifting of the airbags by giving them more resistance against the user's bodyweight. The cabin divider can also include hidden tethers, guiding the airbag's deployment to their intended finishing position.

The dividers also provide protection from loose items in the cabin, with objects on the back seat being caught in the divider instead of being thrown to the front half of the vehicle's interior, eliminating further damage from high-speed projectiles. 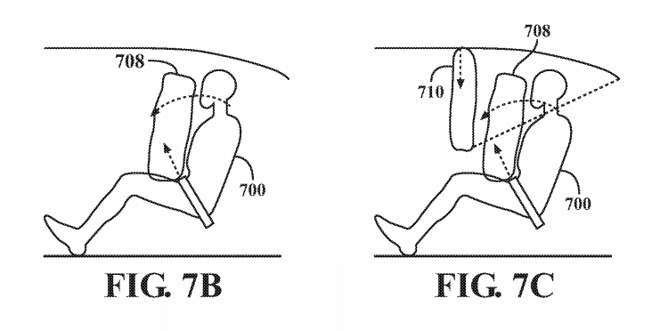 Along with the airbags, the patent also covers the possibility of passengers colliding with each other if facing each other in a collision. With a reverse-mounted front seat and a conventional rear seat, an impact at the front could force the rear passenger into contact with the front passenger's feet or knees.

The rear passenger will also feel more of the impact, as they will be primarily held back by the safety restraint, while the front passenger will be forced into their chair.

In a way to lessen the blow of the impact itself, and to minimize the chance of inter-passenger contact, Apple suggests the seats themselves could provide some movement. On detecting an impact, the seats could move forward a small distance, with the front seat potentially moving further than the rear.

Moving car seats can affect the level of force felt during an impact, and prevent passengers from hitting each other

Apple files numerous patent applications on a weekly basis, but while the existence of a patent indicates areas of interest for the company's research and development efforts, they do not guarantee the concepts will appear in a future product or service.

This isn't Apple's first foray into redesigning safety systems for vehicles. In November 2019, it proposed the use of light-up sections in a car seat to teach people how to use features, such as how to buckle themselves in.

In January the same year, Apple suggested using seat tensioning systems to provide drivers with a form of haptic feedback, while in August 2018, it considered how a seat and restraint could automatically shift to better protect the passenger ahead of a collision. One February 2020 patent mentioned how a car seat and belt could be automatically altered to make it more comfortable or safer during sharp turns.