Two Apple Stores will reopen in Japan on May 27 [u]

AppleInsider
Posted: May 25, 2020 11:51AM
in General Discussion edited May 2020
Apple is preparing to open more stores following its temporary closures prompted by the COVID-19 outbreak, with outlets in Japan set to become among the next group of Apple Store reopenings on May 27. 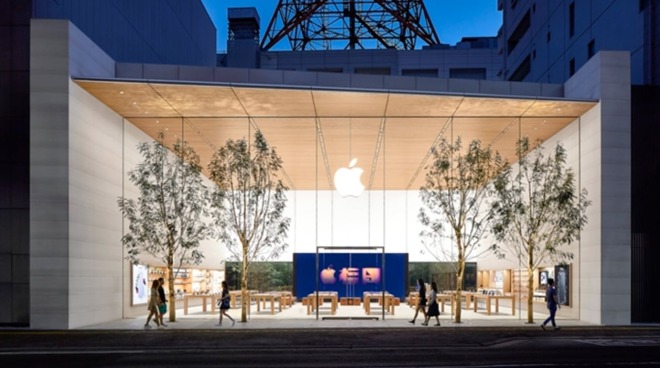 As part of its continuing efforts to bring its retail business back up to speed amid the coronavirus pandemic, Apple is pushing forward with more store openings around the world. A pair of stores in Japan are the first found to be gearing up to open this week on May 27, with Apple likely to open other temporarily-closed outlets in the same timeframe.

Of the ten Apple Stores in Japan, the Fukuoka and Nagoya Sakae outlets show they are opening from 12pm until 8pm local time from Wednesday, as spotted by Bloomberg. The schedule for both outlets also indicate these are changed business hours, a similar notification as seen with other store openings.

The slow reopening of stores is due to Apple's cautious approach, as it is implementing new safeguards to protect both customers and store employees. Temperature checks will be required to enter the store, along with face masks, with stores also limiting the number of customers who can enter at a time, as well as regularly deep cleaning the stores throughout the day.

Apple is also expanding the options for customers to visit stores by providing curb-side pickup and drop-off at some locations.

The two stores in Japan follow recent openings including 25 locations in the United States, 12 in Canada, and 10 in Italy.

Update: Apple will open the doors to its flagship store in Sydney, Australia, on May 28.