AppleInsider
Posted: May 27, 2020 9:28PM
in iOS
Hours after HBO launched its long-awaited HBO Max app on iOS, Apple TV and other platforms on Wednesday, the AT&T-owned company has pulled streaming integration with Apple TV Channels. 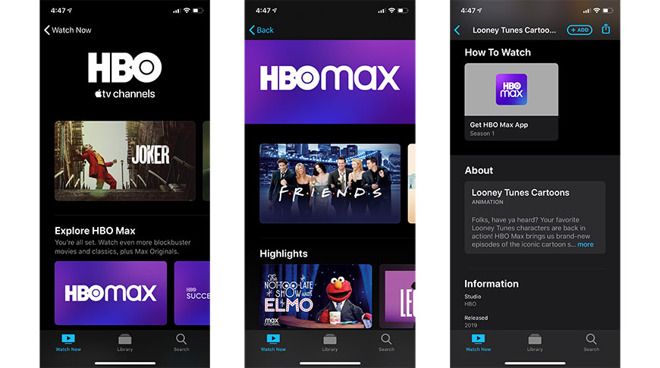 Advertisements for HBO Max have taken over HBO in Apple TV Channels.

One of the first major cable networks to sign on to Apple TV Channels, HBO is no longer available to new users accessing Apple's collaborative streaming hub.

Existing customers who signed up for HBO's streaming service through Apple TV Channels will retain access to the provider's content through the TV app. The situation could change in the coming months as HBO pares down its various streaming offerings in a move to consolidate and push users to HBO Max. Users are already being herded toward Max, as advertisements for the new service are plastered across the HBO section of Channels.

It should be noted that Channels programming does not include new shows, movies and specials created or purchased for HBO Max. For example, users attempting to access Looney Tunes cartoons in Channels are directed to download HBO Max via the App Store. Those who subscribed through Channels can, however, use their Apple ID to authenticate the new, and more expansive, HBO Max app which debuted today.

Apple TV Channels was introduced alongside iOS 12.3 in 2019 as an alternative to dedicated streaming apps. Integration with Channels allows users sign up and subscribe to a variety of premium television and streaming services in one place, thereby making standalone apps unnecessary.

HBO was among the first batch of paid cable providers to offer support for Channels when the system debuted. At the time, it was the only place HBO users were able to download content for offline viewing.