AppleInsider
Posted: June 16, 2020 9:45AM
in General Discussion
The German government has released its COVID-19 contact tracing app for iOS and Android, and is urging the local population to download it. 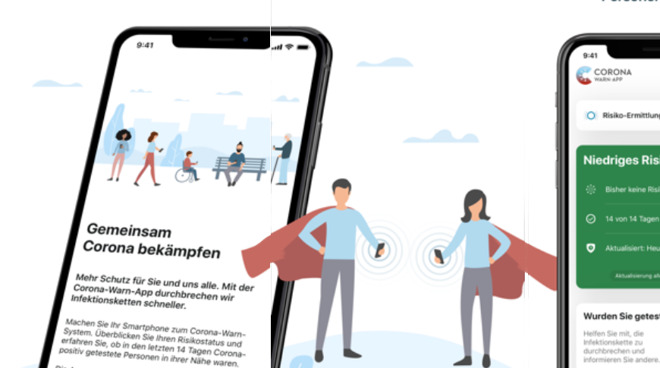 After abandoning its own scheme and adopting coronavirus exposure notification technology from Apple and Google, the German government has launched its app. The new Corona-Warn-App follows similar ones launched in Italy, Poland and Switzerland.

"Everyone who downloads the app, and everyone who encourages friends to do so, is making a difference," said health minister Jens Spahn on German ZDF television, according to Reuters.

The app was developed by Germany's Robert Koch Institute, which has published its source code on GitHub as part of its aim to reassure people concerned about the privacy of their data.

"The app remembers our encounters with others in a decentralized manner and informs us digitally when we have had encounters with demonstrably infected people," says the app description in the German iOS App Store (in translation). "However, at no time does it collect information about the identity of its users. Who we are and where we are remains secret -- and our privacy is well protected."

Earlier, ZDF had conducted a poll which showed 42% of people planned to download the app, while 46% did not -- and 8% didn't have a smartphone. Previously the German government had said that 60% penetration was needed for the app to work, but Reuters says they have walked that back and are no longer specifying a target.