AppleInsider
Posted: June 18, 2020 6:24PM
in iPad edited September 2020
With USB-C on the iPad Pro, comes the ability to connect external storage. AppleInsider compares our top picks for the best portable SSDs for iPad Pro all with a small form factor, performance, and durability. 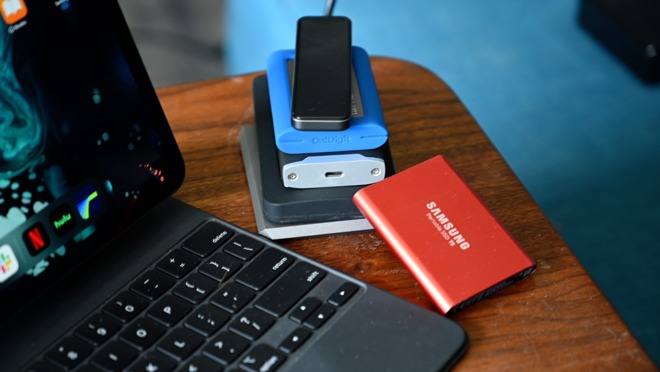 There are a lot of great SSDs for iPad Pro

Apple continues to expand the iPad, advancing the hardware and providing software updates that deliver new and productive features. Pairing a portable SSD with Apple's iPad Pro can help take you even further.

Thanks to recent updates to iPadOS, Apple has enabled external storage access from within Files as well as within third-party apps that utilize iPad storage. 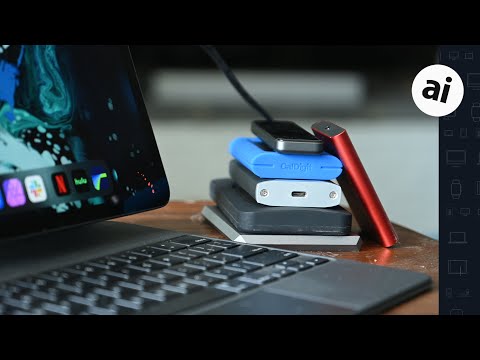 It is now possible now to edit 4K videos off of an external SSD or edit your library of sizable RAW photos from that extra storage. And that's beyond the basics of storing files, sharing content, and much more.

As devout iPad Pro users, we've searched for the best mobile SSDs for our tablets to help get the job done. We're focusing specifically on SSDs that are all USB-C and exceptionally compact, perfect for pairing with a tablet. 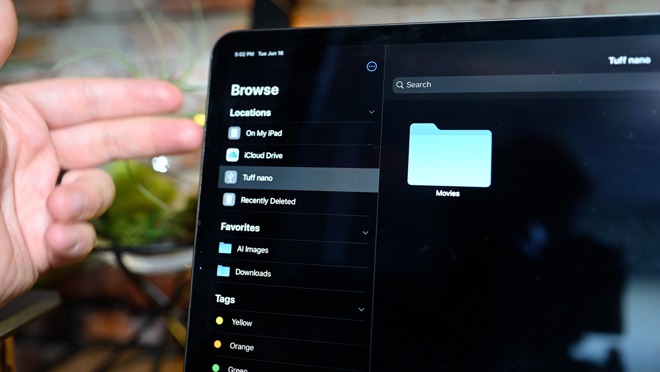 Of all the SSDs out there we'd consider ideal companions for our iPad Pro, we're dividing them up into two groups -- the ultra-rugged and stylish. That isn't to say the durable SSDs don't look great, they just have that as a priority versus the others.

Kicking things off is the CalDigit Tuff Nano. This diminutive drive has a strong, aluminum body and is wrapped in a colorful (and identifying) silicone bumper. That bumper not only lets you have multiple of these drives that can be easily distinguishable from one another, but adds some additional drop protection from the other metal drives in the lineup. 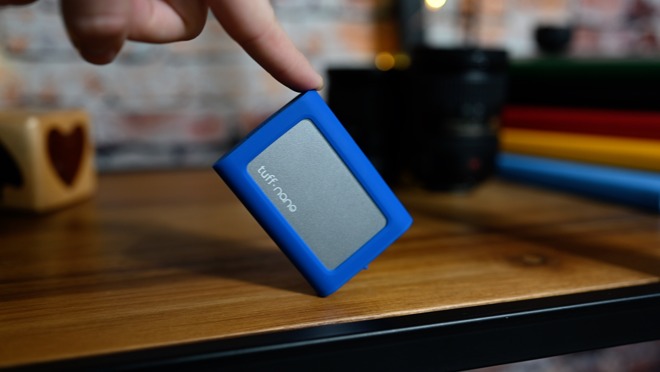 We've picked up a few of these and we go back to them time and time again for that small size, durable design, and color-coding. With the different colors, we can easily distinguish between our video scratch SSD, out photo library, and our backup for our Mac.

These guys have an IPX8 water resistant USB-C port which is also protected from dust with a silicone dust cover. It sports a 1055 megabytes per second max transfer speed. They come in 512GB and 1TB capacities.

Own your CalDigit Tuff Nano starting at $129.95 from Amazon.

The Glyph Atom RAID SSD is another great rugged option. It too has a metal body wrapped in silicone, though it is a big larger and heftier than the Tuff Nano.

Inside it has two SSD modules set up in a hardware RAID for a single volume when connected to your machine. But those two modules in a RAID 5 configuration allows both SSDs to be written to at the same time, roughly doubling its speeds. This yields max speeds of 950 megabytes per second.

Grab your Glyph Atom RAID SSD starting at $249.95 from Amazon.

Rounding out our rugged category is the GDrive Mobile SSD. Available in 500GB, 1TB, and 2TB sizes, this drive is the only one specifically rated and tested for crush resistance. It is able to withstand 1000 pounds of pressure without breaking down. 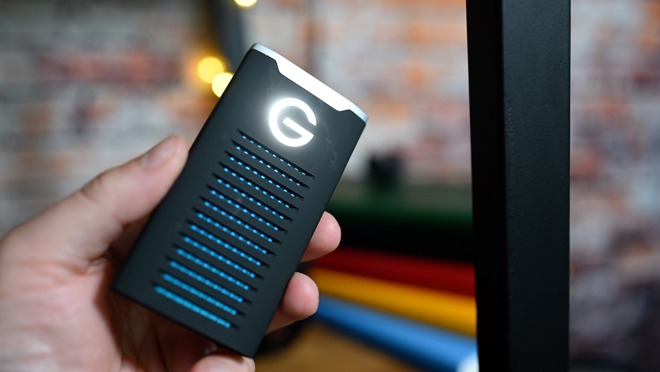 Additionally, it has IP67 water and dust resistance and can withstand drops from up to three meters, making it even more durable. This is due to its multi-level design. It has a matte exterior with a vivid blue aluminum core. This is protective as well as very sleek to look at.

For speed, it can reach 560 megabytes per second which does put it below our first few rugged drives but is still fast being an SSD. Many may prefer its extreme durability for its reduced speeds.

One of the most prominent names in SSDs is Samsung and its T-line of drives. New this year is the T7 and T7 Touch. 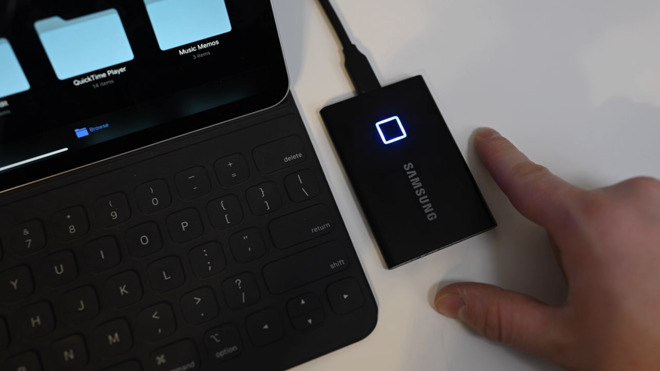 These drives retain a lot of the style as the previous generations which is an extruded aluminum shell with plastic caps on either end and often many different stylish colors.

The T7 Touch version differs by offering a fingerprint sensor on the drive itself to protect its contents. For sensitive material, it affords a great deal of protection with the iPad Pro being password protected and the drive itself protected via biometrics.

Grab the T7 Touch from B&H starting at $209 as well as from Amazon.

If you don't need the speed of the T7 line, then the now-superseded T5 is an excellent option. 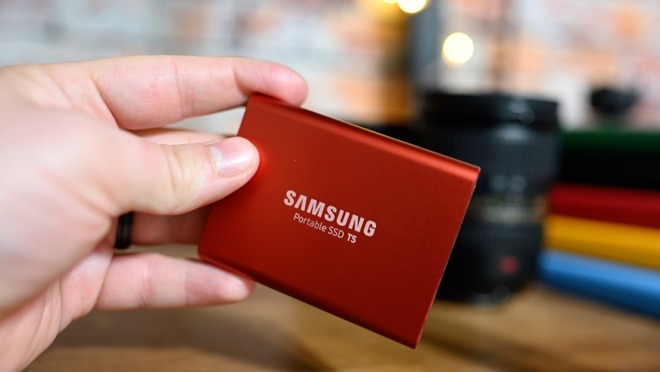 The T5 comes in 250GB, 500GB, 1TB, and 2TB sizes and a smattering of different colors. They still have the same aluminum body but a slightly different size from the T7.

The Samsung T5 is available starting at $169.

A new entrant to the market, RAVPower is out with its new mobile SSD. This one has a unique shape unlike any of the others on our list. Instead of short and squat, the RAVPower Mobile SSD is long and very thin. 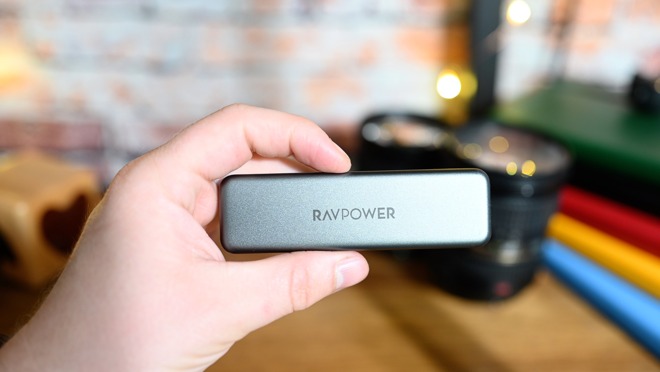 It has a zinc alloy casing with a piano-like baked surface, similar to a ceramic, that aids in cooling on the other. The piano-like surface is a dark grey to black with tiny reflective particles within. It looks fantastic.

It comes in 512GB and 1TB sizes and can reach 540 megabytes per second for its max transfer speed.

Pick up the new RAVPower Mobile SSD on Amazon For $89.98 (currently has an additional $10 off). 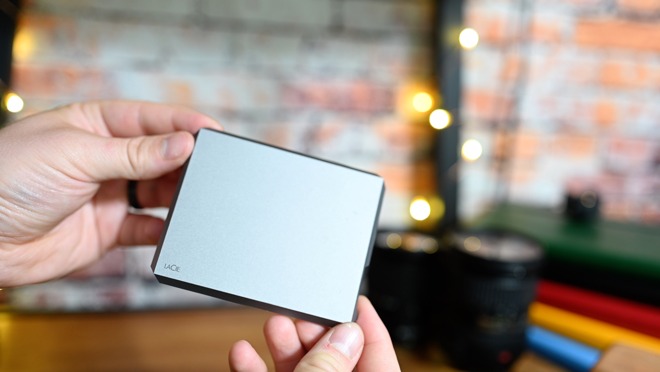 Then we have the LaCie Mobile SSD. This unique entrant is very flat and wide, crafted entirely from aluminum. It has diamond-cut edges for a unique look like no other. The space grey option of the bunch is an Apple Store-exclusive which matches the darker hued iPad Pro perfectly.

It is the most designer-esque of the bunch, catching eyes without a doubt. It is available in 500GB, 1TB, and 2TB capacities with speeds up to 540 megabytes per second. You can pick it up from Apple.

Get the job done

This list encompasses the best of the best, offering drives that are protective, durable, reliable, small, and blazing fast. Certainly there's something on this list of drives that we like, that will be suitable without breaking the bank.