AppleInsider
Posted: July 2, 2020 4:20PM
in General Discussion
The Apple App Store generated $32.8 billion across the globe in the first half of 2020, nearly double that of the Google Play store. 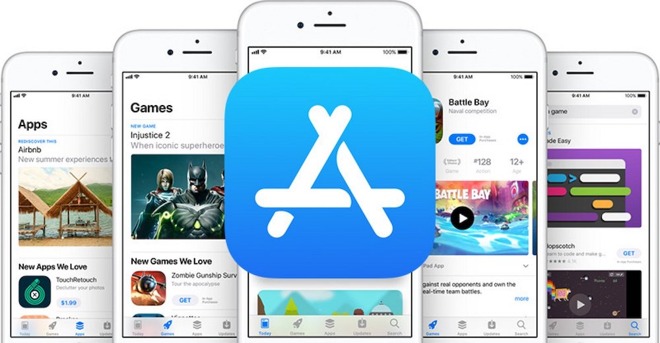 That number, based on data estimates from app analytics firm Sensor Tower, represents the total amount spent on in-app purchases, subscriptions and premium apps and games within the first six months of 2020. The firm bases its projections and predictions on data points, such as app analytics, and proprietary algorithms.

Consumers spent a total of $50.1 billion on the two largest app marketplaces during that period, Sensor Tower Store Intelligence estimates show. Notably, spending on the App Store was nearly double the gross revenue of the Google Play store, which clocked in with $17.3 billion.

As far as apps themselves, Sensor Tower estimates that there were 71.5 billion first-time downloads in the first half of 2020. The App Store accounted for 18.3 billion of those, a 22.8% year-over-year increase. That growth was at least partly attributed to global lockdowns amid the coronaviruscrisis.

The mobile gaming ecosystem also surged in the first six months of the year. Spending on the sphere was up 21.2% from the year before. Apple's App Store generated in-game spending growth of 22.7%, reaching a new milestone of $22.2 billion.

Apple doesn't release detail statistics or results from its app marketplace, meaning app analytic estimates like these are often the only indication we get of the app economy's growth. With that being said, estimates aren't always accurate.

Recently, Apple did highlight an independent economic study looking at the total commerce generated by its App Store. Per that study, the marketplace contributed to more than $500 billion in total billings and sales.

Previously, Sensor Tower released a report showing that iPad app downloads were surging in the first quarter of 2020. Past reports from the analytics firm have also cemented the App Store's dominance over Google Play.

The App Store estimates come during a time of increased antitrust scrutiny over Apple's specific developer guidelines and in-app payment policies in the U.S. and Europe.