AppleInsider
Posted: July 16, 2020 3:06PM
in General Discussion edited July 2020
Apple is working on two-coil wireless charging technology for an iPhone battery case without using the Lightning connector, something that would be necessary for a completely wireless iPhone. 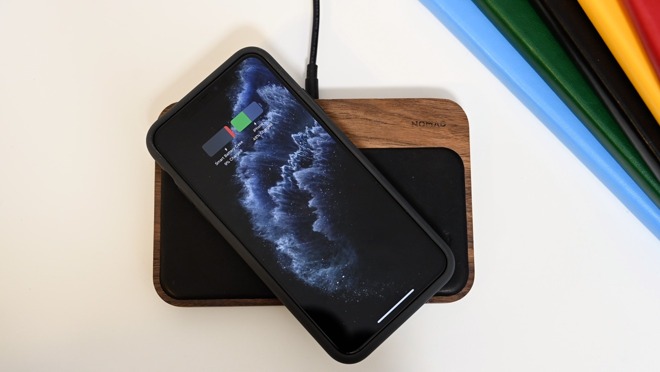 Current Smart Battery Case models only charge wirelessly. They transfer power to an iPhone via Lightning.

Current Smart Battery Case models can charge themselves wirelessly, but use a built-in Lightning connector to power the iPhone they're attached to. That could prove to be a problem on a completely wireless iPhone.

In a patent that was filed in May 2019 and awarded to Apple on Thursday, the company describes a smart battery case that could use two coils for bidirectional wireless charging.

As the patent explains, the case could use its own built-in battery to power up a connected device using the second coil in an open state. Similarly, the case can also receive power itself wirelessly in this open state.

Put another way, the next-generation Smart Battery Case could ditch the built-in Lightning connector and charge the device it's attached to via Qi wireless charging. And, the battery case will be able to transfer power directly to an iPhone in a "pass-through" without charging its own battery.

The details described in the patent are notable because current Apple Smart Battery Case models only contain a single coil and rely on Lightning to charge the device. That's why they can't presently charge an iPhone via Qi wireless charging, and why they use a Lightning connector instead.

A next-generation Smart Battery Case that ditches a Lightning connector could prove to be important amid rumors of a "port-less" iPhone. In 2019, well-connected analyst Ming-Chi Kuo forecast that Apple could ditch the Lightning port in favor of a "completely wireless experience" by 2021. Other leakers, like Jon Prosser and @choco_bit, have corroborated that rumor.

In place of Lightning, the port-less device -- possibly the "iPhone 13" -- would feature Qi wireless charging and an iPad Pro-style Smart Connector. Rumors of a Smart Connector on an iPhone stretch back to 2017.

The patent application Thursday names Rohan Dayal, Stephen C. Terry and Narendra S. Mehta as its inventors. The first two inventors have worked on Apple wireless charging patents in the past, while Mehta invented charging systems for Qualcomm.