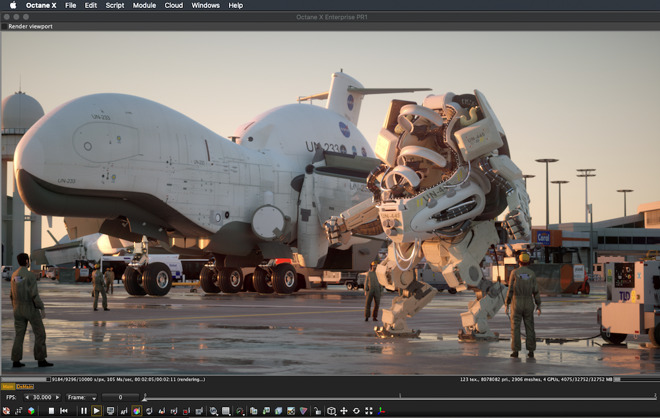 Octane X is a new version of Otoy's OctaneRender that has been completely rewritten in Apple's Metal graphics API as part of a "long and deep collaboration with Apple's world-class engineering team." It was originally debuted at Apple's WWDC 2019 keynote alongside the Mac Pro.

Otoy on Monday announced that the public preview of Octane X has officially launched for macOS Catalina 10.15.6. It's fully optimized for both AMD Vega and Navi GPUs across Apple's Mac Pro, iMac, iMac Pro and MacBook Pro lineups.

The company's lineup of unbiased, GPU-accelerated rendering platforms are widely used in film, TV, games, motion graphics and AR/VR applications. Although optimized for a range of Apple Macs, Octane X was crafted with the Mac Pro in mind. In 2019, Otoy CEO Jules Urbach said that "Octane X will be leveraging this unprecedented performance to take interactive and production GPU rendering ... to a whole new level."

According to the company, Octane X features a completely rewritten mesh geometry engine and near perfect linear scaling of rendering speed with multiple GPU configurations -- including eGPUs plugged in via Thunderbolt 3. It ships with RNDR, a distributed rendering platform that lets graphic artists leverage networks of decentralized GPUs to power tasks. On a Mac Pro, it also supports up to 400 GPUs over network rendering and 56 Xeon CPU threads with up to 1.5TB of out-of-core memory.

Based on OctaneBench scores on a Mac Pro with a Radeon Pro Vega II Duo MPX Module, Octane X also delivers the fastest score ever for a single slot graphics card. The renderer clocked in with a score of 415 on the machine, surpassing the previous top score of 401.

The public preview will be available on macOS Catalina starting Monday for current OctaneRender Studio and Enterprise subscribers. Otoy added that Octane X will also be available for free to all new users activating Octane X on 2019 or later models of Mac Pro, iMac and MacBook Pro running macOS Big Sur.