AppleInsider
Posted: July 23, 2020 4:36PM
in General Discussion
A new report highlighting when and where has Apple opened or closed its stores around the world in response to the coronavirus pandemic, demonstrates how Apple makes key safety decisions, quickly. 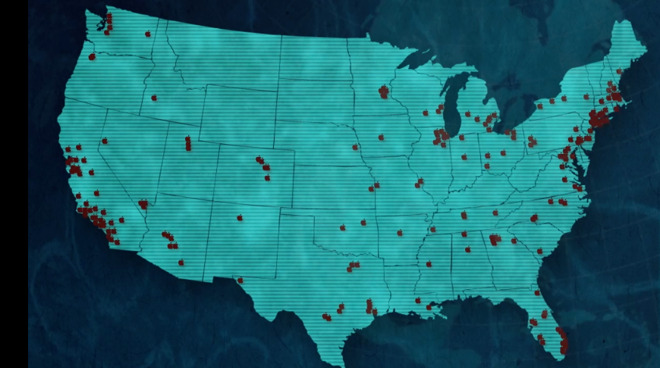 Apple Stores in the US (Source: Wall Street Journal)

As the coronavirus continues to see Apple reopening Apple Stores, and in some cases closing them again, the Wall Street Journal claims that the company is following a strategy. It specifically says that if we want to know where the next lockdown will be, we should watch what Apple is doing.

After the earliest days of the coronavirus in China, Apple has become especially quick to close stores. Typically Apple will close a store in a country or a region at least some days before other retailers do, and before government mandates it. Sometimes, as with its re-closure of Florida stores, it is closer to two weeks ahead of its rivals.

Unfortunately, the strategic analysis that the Wall Street Journal offers doesn't work. It's not a clever strategy that other companies could emulate, and in a video promoting the claim of a strategy, the publication admits this.

After recounting how Waffle House is known for how it cuts down its menus depending on local weather conditions, the publication tries comparing that to Apple. "Is Apple the COVID equivalent," it asks, "or is Apple just more nimble than other retailers because of its business strategy -- and 200 billion in the bank?"

It ultimately comes down to the latter. Gene Munster, managing partner Loup Ventures, who has previously commented on Apple, told the publication that Apple has the ability to close its stores because they aren't its sole source of income.

Closing stores does not simply represent a loss of income that can be replaced by customers buying online instead, though. Apple has continued to pay its staff and it's estimated that the wage bill for June will cost Apple $200.

With Apple being the success it is, it's easy to casually assume that it can afford to lose that money. The Wall Street Journal instead details the financial situation, reporting that Apple has an estimated $80 billion of available cash. And the compares that to Nike's reported $8 billion, and Best Buy's almost $4 billion.

"Apple has so much cash on hand," says the publication, "that it could run its operations for more than a year without cutting its costs or selling a single iPhone."

Significantly, the Wall Street Journal reveals that Apple researches store closures on a county by county basis in the US. It looks at publicly-available data such as county level case numbers, positivity rates, hospital ICU and ventilator usage. Where that data is not available publicly, though, Apple reported contacts each county to request it.

So Apple is being diligent about researching the coronavirus situation everywhere it has a Store, and it is closing them admirably quickly. But if this is part of a strategy, that strategy is the one that has made the company the most profitable in the world.

It isn't a strategy that other retailers can afford to emulate. It may, though, be a way to help individuals trying to assess their own local situation.