AppleInsider
Posted: August 5, 2020 1:49PM
in General Discussion edited August 2020
On Wednesday, the Virginia Department of Health released its official COVID-19 exposure notification app, and it is the first in the United States to use the Google and Apple API. 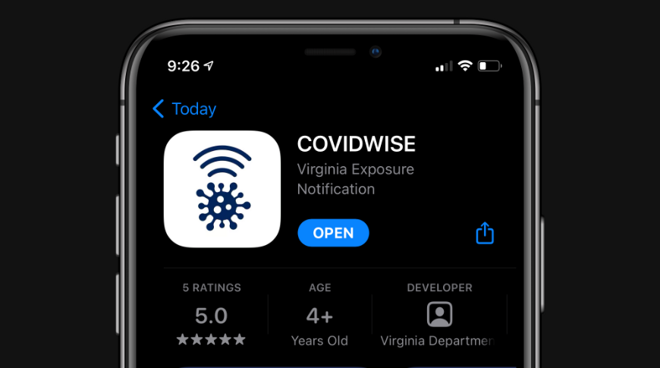 COVIDWISE app by the Virginia Department of Health

Apple and Google engineersteamed up to create a cross-platform API for tracing the spread of coronavirus. The API was officially released in May 2020 and has seen little adoption since.

Canada was one of the first countries with such an app, releasing it at the end of July. The app relied upon Canada's health system to inform the app of a diagnosis.

The Virginia app is called COVIDWISE and works similarly. When you have been diagnosed by a doctor, you must complete a questionnaire in the app to alert other users of the diagnosis. When logging this data, it is only to verify a positive result, and does not expose your personal information to others. 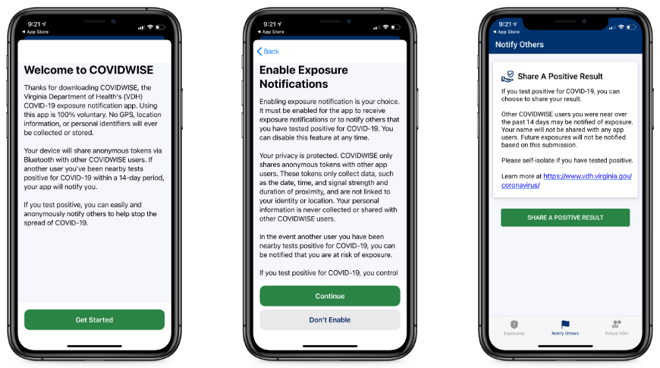 COVIDWISE is very barebones by design

When the app is enabled, it will run in the background with no interaction from the user. If the phone determines that you have been close to another individual using the app for an extended period of time, it will store those credentials shared by the other phone.

The system uses bluetooth to exchange tokens and will not have noticeable effects on battery life.

The iOS 14 beta 4 has a dedicated settings section for exposure notification, but it is still not reliable. For the COVIDWISE app to work properly, ensure you are running iOS 13.6.