AppleInsider
Posted: August 10, 2020 4:52PM
in Apple Watch
Google has made some changes to how Google Maps works on Apple devices, with updates made to the interface when used in CarPlay, as well as a new Google Maps app for Apple Watch providing navigation on the wrist. 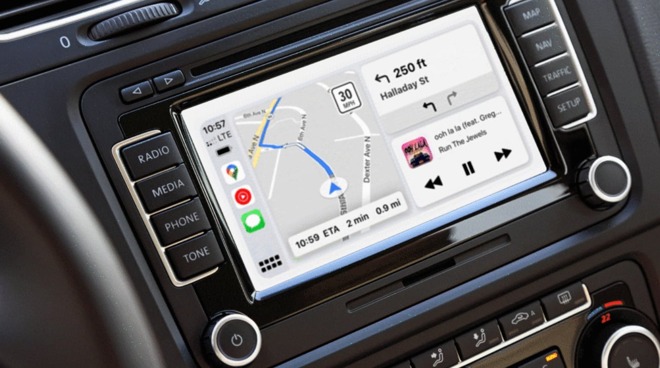 Drivers using Google Maps for navigation in CarPlay will now be able to view the map in a new split screen view, after Google added support for CarPlay's Dashboard. The main map view is placed on one side of the screen, while the other half is split to show the next navigational step along with other items a driver may be using.

Google bills this as a way to manage other bits of information without needing to leave the turn-by-turn navigation of Google Maps, and for drivers to quickly get the information they need while keeping focus on the road.

Google Maps has been enabled in CarPlay since 2018, after Apple allowed third-party navigation apps to be usable via the platform alongside Apple Maps. In March, Apple enabled third-party navigation apps to function directly on the CarPlay Dashboard as part of iOS 13.4, but it has taken five months for Google to update the app to support the feature.

The Google Maps for Apple Watch app is a refreshed version of Google's original, which will provide navigational guidance to places the user has already saved within the iPhone app. Users can check estimated arrival times and select from a variety of different transportation types, which will adjust the route Google Maps offers.

Google did previously have a Google Maps app for the Apple Watch, but ended support for watchOS in 2017.

The updated Google Maps support for CarPlay Dashboard is available now, while Google Maps for Apple Watch will roll out globally in the coming weeks.