Apple Watch antennas could improve by being moved to the rear

AppleInsider
Posted: August 11, 2020 12:17PM
in Apple Watch
A future version of the Apple Watch could spread its antennas throughout the wearable device's body, including adhering some relating to wireless connectivity on the back casing, to improve the quality of reception. 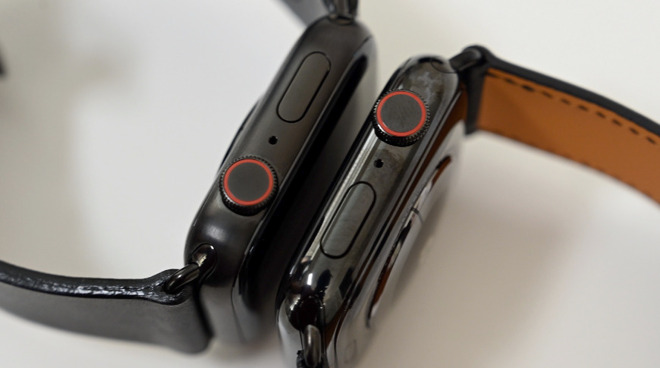 The Apple Watch relies on multiple different types of radio signals to function, including those governing Bluetooth, Wi-Fi, NFC, GPS, and cellular connections. As these systems rely on picking up different wavelengths with accuracy, this entails the use of multiple antennas, as an antenna may be effective for one type of signal but not another.

Aside from finding space for all of the antennas, the quantity also means there's the potential for them to interfere with each other, making it essential that the antennas are positioned perfectly.

In a patent granted by the US Patent and Trademark Office on Tuesday titled "Electronic devices having integrated antenna structures," Apple suggests a solution in the form of a dielectric rear housing wall on the back of the Apple Watch, that could be used to house some antennas.

The extra layer would be mounted to the rear casing of the Apple Watch.

The substrate could also include openings that can allow sensor components and circuitry to pass through, such as for the rear module used for monitoring the user's heart rate.

For the antennas, Apple says it could embed an antenna resonating element within the substrate, with multiple such elements embedded on opposite sides. These elements could be attached to radio-frequency transceiver circuitry powering things like NFC, with the filing advising this would be used for radio frequency signals above 10GHz.

Versions of this could use protruding elements in the dielectric structure to hold the antenna resonating elements, which are extended away from the sensor components and circuity to minimize interference.

Apple envisions the layer as a loop, so as to not interfere with the heart rate sensor.

Placing it near the rear housing and the wrist isn't entirely a bad idea, as that does leave the sides of the Apple Watch casing that don't have sensors and buttons as ideal places for radio signals to pass through.

The patent lists its inventors as Daniel J. Hiemstra, Jayesh Nath, and Timothy B. Ogilvie. It was originally filed on September 26, 2019.

Apple files numerous patent applications on a weekly basis, but while the existence of a patent indicates areas of interest for Apple's research arm, it doesn't guarantee the ideas will appear in a future product or service.

This is not Apple's only look into creating new antennas for the Apple Watch lineup. In August, Apple wanted to embed antennas for wireless connectivity inside the display of an Apple Watch, while a filing from November 2019 suggested the antennas could be hidden within the watch band.