AppleInsider
Posted: August 20, 2020 9:55AM
in General Discussion
Apple's [AR]T project with renowned artists creating Augmented Reality works for Today at Apple is now the subject of an Apple TV+ film. 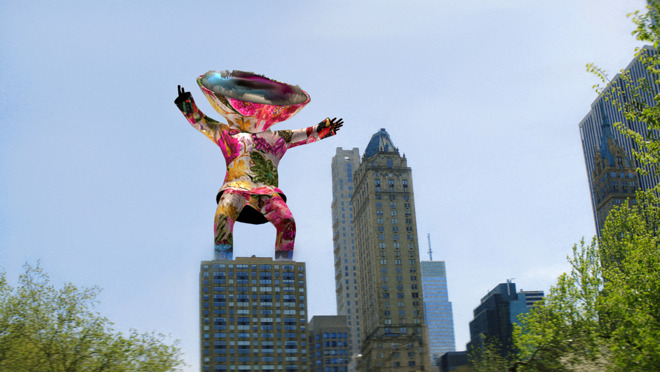 Nick Cave's Art Walk, one of the [AR]T sessions at Apple Stores now featured in the film "Infinite Canvas"

In 2019, Apple announced a series of artists to collaborate on an Apple AR project to be used as part of Today at Apple. Now those sessions, and the artists, are profiled in "Infinite Canvas," a new Apple TV+ film.

"Augmented reality is a way of overlaying virtual objects into a physical space," says Sarah Rothberg, artist and educator, in the film. "It's about experimenting, figuring out the edges of what it can do, and what you want to do with it."

"It can transform or it can make sounds or it can understand that there's a user present, and interact with them in different ways," she continues. "You're building a language. It's like an infinite canvas in all directions."

The project began in 2018 with Apple and Manhattan's New Museum commissioning seven artists around the world. In "Infinite Canvas," photographer Ryan McGinley meets with each of these artists, none of whom had ever worked in AR before.

What they each created became an [AR]T session at Today at Apple, a live workshop that involved Apple staff taking attendees out of Apple Stores and on a tour. Walking through local landscapes such as New York City, attendees would see the familiar streets augmented with AR sculptures. Or the bright blue sky would become a canvas too.

The [AR]T sessions were built to be live and interactive, so while "Infinite Canvas" shows the results, its 65-minute running time is more focused on documenting the artists and their process.

When Apple originally announced the special Today at Apple sessions, Tim Cook tweeted that it was a peek into the imaginations of seven contemporary art visionaries.

"Today at Apple offers a window into the creative arts made possible by our products and customers," added Deirdre O'Brien, Apple's senior vice president of Retail + People.

"We hope attendees are inspired by the incredible AR creations in the [AR]T Walk and in-store installation," she continued, "and we can't wait to see what our visitors learn to create in the [AR]T Lab."

"Infinite Canvas" is free to watch on Apple TV+ now.