AppleInsider
Posted: September 15, 2020 1:04PM
in General Discussion
An Apple Watch band could be that which contains controllable protrusions, and Apple is researching elements that can be raised or lowered to present tactile information on the surface. 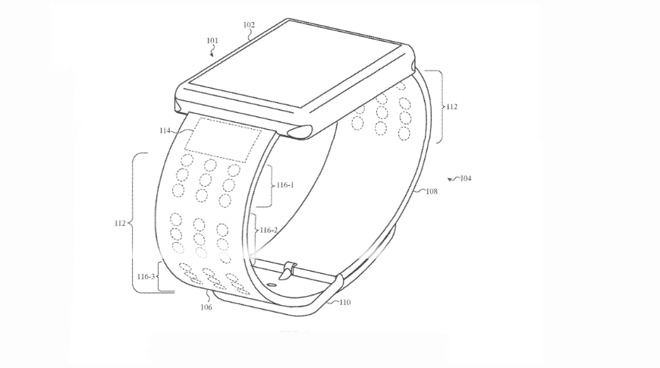 "Tactile output for wearable device," is a newly granted US patent which aims to change that. Alongside the various things Siri can say aloud since the Apple Watch Series 3, there could now be Apple-designed bands that display Braille information.

While Apple wants its patent to cover any kind of electronic device possible, most of its descriptions and all of its drawings refer to the Apple Watch and to what Apple refers to as actuators. These are components that respond to a processor and cause other elements to move or rearrange.

That's a watch band and Apple says that these "tactile output mechanisms" could be "configured to selectively form and remove tactile symbols." The patent alludes to using these protrusions either on the inside surface of a strap, where it touches the skin. However, it's mostly concerned with the outside, where they could be read with the touch of a finger from the user's other hand.

These protrusions are similar to the raised dots in Braille, but Apple says they needn't be confined to that one system. Rather than following the established patterns of whole words in Braille, the same protrusions could be configured to "also or instead be dynamically and/or selectively actuated to form [the] shapes of alphanumeric characters."

So a band with these features could, for instance, show text indicating your next event, or any short information. The band could list a countdown timer to that next event, or a stopwatch for your current workout.

Apple has often explored ways of making more use of the strap, such as adding buttons to one.

This latest patent is credited to Steven C. Michalske. His previous patent work includes how retailers such as Apple can display electronic items without needing unsightly security cables.
Sign In or Register to comment.