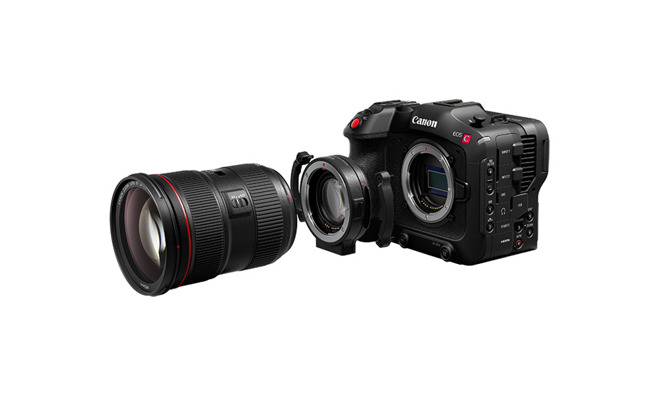 The camera is akin to a cross between Canon's standard EOS cameras and a cinema camera, and the addition of an RF mount allows it to take advantage of the same range of lenses offered for its mirrorless devices. As with other cameras in the Cinema line, it's primarily aimed at high-performance video recording and filmmaking.

In contrast to the typically heavy cinema cameras, the EOS C70 provides similar performance in a more compact and lighter-weight form factor. It weighs just over 2.5 pounds and is actually smaller than DSLRs like the EOS 1D X Mark III.

Alongside the RF mount, the EOS C70 brings other firsts to the Cinema lineup. It features an Intelligence Tracking and Recognition system that recognizes faces and heads using machine learning, and an automatic ISO system for situations where lighting may be changing quickly.

The camera features Canon's Super 35mm DGO 4K sensor, which it says further extends the high dynamic range and lowers noise levels of images. Canon says the sensor provides pictures "up to 16-plus stops of total dynamic range, clean, rich shadows, and vibrant highlights in up to 4K/ 60p or 2K/120p in Super 16mm Crop mode."


It also supports 9x16 vertical shooting, and features a built-in mini-XLRS and a neutral density filter system.
The EOS C70 seems aimed at filmmakers and documentarians who need a more compact device, as well as creatives and social media influences.

Canon says the EOS C70 is slated to debut in November 2020 for $5,499. Interested buyers can preorder the camera at B&H Photo and Adorama.