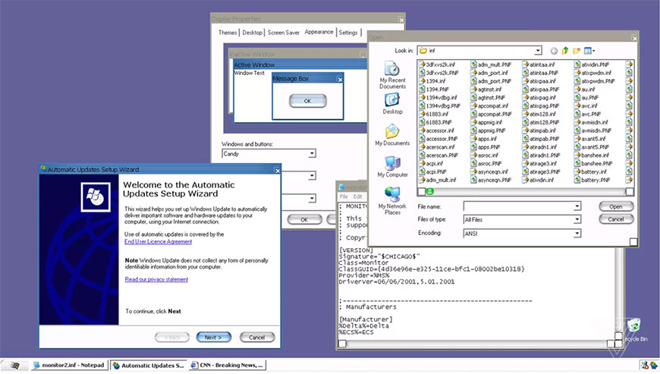 Among a cache of Windows XP source code files that leaked online Friday are a variety of unused, sometimes incomplete, UI themes Microsoft created for its early 2000s operating system, reports The Verge.

One theme, dubbed "Candy," will be very familiar to anyone who has used a Mac running Mac OS X 10.0. A number of UI elements closely resemble or match Apple's Aqua theme, a fact perhaps most apparent in shiny, rounded window buttons designed to mimic droplets of water.

Aqua debuted at the Macworld Conference & Expo in 2000 and made its way onto Mac a year later. The theme uses a unique combination of depth through shadows, bright colors, translucency, rounded interactive assets and textures to create the appearance of liquid or gel sitting on metal plates.

According to The Verge, "Candy" was present in early source code for Windows XP, with developers using the skin as a placeholder as they built out the operating system's theme engine. Files refer to the theme as a "Whistler skin with eye candy," and are marked as "for internal use only," the report says. Microsoft referred to Windows XP as "Whistler" prior to its market debut.

The Redmond, Wash., software giant ultimately landed on a blue, green and silver theme called Luna. While it incorporated shadows and gradients to indicate depth, Luna lacked the translucency that Aqua provided, making it more akin to traditional Windows versions.

Apple and Microsoft have for decades battled in the desktop operating system space, with each company looking to outdo the other on features, capabilities and style with every new release. As the most prominent user-facing element, themes were often viewed as a key differentiator. In recent years, however, the focus has turned to more functional aspects like reliability, security and performance.