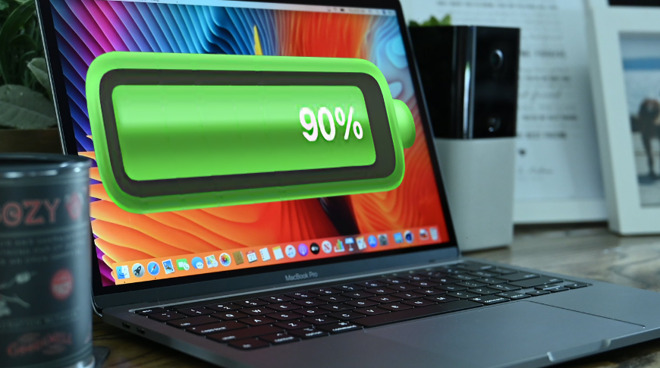 Hydrogen fuel cells could power devices for "days or even weeks," according to Apple.

Apple patents are always about technology, or systems to use that technology, and occasionally they are specifically for devices such as the MacBook Pro. The newly granted "Portable computing device for external fuel cell control," is all of these things, but it's also unusual in how it sets out both the environmental and the political concerns that have prompted it.

"Our country's continuing reliance on fossil fuels has forced our government to maintain complicated political and military relationships with unstable governments in the Middle East," says Apple's patent, "and has also exposed our coastlines and our citizens to the associated hazards of offshore drilling."

Apple doesn't exactly say that hydrogen fuel cells are the perfect battery for the future, but it does list exactly why it calls the technology so "promising."

"Hydrogen fuel cells have a number of advantages," says Apple. "Such fuel cells and associated fuels can potentially achieve high volumetric and gravimetric energy densities, which can potentially enable continued operation of portable electronic devices for days or even weeks without refueling."

You know there has to be a 'but' or we'd already be using these cells. "[But] it is extremely challenging to design hydrogen fuel cell systems which are sufficiently portable and cost-effective to be used with portable electronic devices," explains Apple.

That's what this patent is meant to solve. It's about "the design of a portable and cost-effective fuel cell system for a portable computing device," which converts fuel -- such as hydrogen-based -- into electrical power.

Detail from the patent. Notice the Magsafe reference

The research contains many different possible solutions to generating the power, and getting it into the device -- including a reference to a MagSafe-like connector. In each case, though, the idea is that a "fuel cell stack... produces electrical power by converting a source fuel... into an electric current and a waste product."

Where the patent varies is in the precise detail of this fuel cell stack, and how the power is generated. For instance, one example proposes that "the fuel cells may be proton exchange membrane (PEM) fuel cells that use hydrogen as a fuel." Another suggests that the stack "may correspond to solid oxide fuel cells, molten carbonate fuel cells, direct methanol fuel cells, alkaline fuel cells, and/or other types of fuel cells."

Beyond the claim that a working system like this could power a device "for days or even weeks," there is no further estimate about battery life. Nor is there any indication of exactly how far along Apple may be in implementing the patent's solutions.

Apple has long been researching power and battery technologies. It's even had previously applied for patents on the subject of using hydrogen as long ago as eight years.

This newly granted patent is credited to six inventors, all of whom have previous patents in the same field, to do with fuel cell systems specifically for small devices. That includes Bradley L. Spare, Vijay M. Iyer, and Jean L. Lee, who are together also credited on "Fuel cell system coupled to a portable computing device."