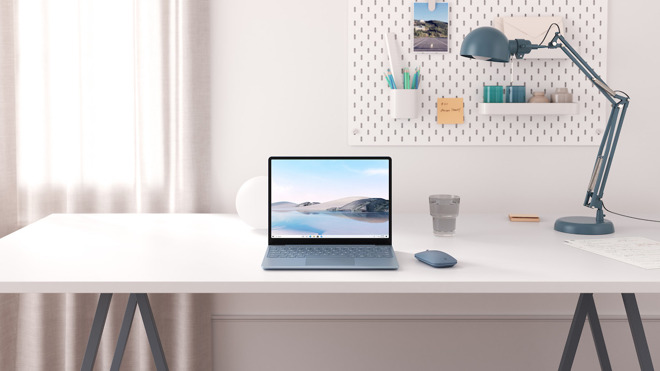 The Surface Laptop Go is much more affordable than other Surface devices, and the lower-end models seem aimed at poaching Chromebook buyers. But the more expensive tiers could be a competitor to Apple's MacBook Air.

Instead of any significant new features, most of the changes on the here are on form factor and price. It packs a 12.4-inch display, weighs less than a MacBook Air at 2.45 pounds, and starts at $549.

Here's how it stacks up against Apple's MacBook Air.

The Surface Laptop Go features a single USB 3.2 type-C port and a single USB 3.1 type-A port, as well as a 3.5mm headphone jack and a Surface Connect charging port. The camera is a 720p webcam that won't support Windows Hello facial recognition. For biometrics, users get a fingerprint reader in the power button -- but only on the $699 and $899 models. The MacBook Air features two Thunderbolt 3 ports and an integrated Touch ID sensor.

The $899 Surface Laptop Go is the top-end model and the most serious competition to Apple's MacBook Air. But Microsoft also has two other tiers for the laptop, and both leave quite a bit to be desired.

For example, the base model isn't much of a laptop replacement, packing just 4GB of RAM and 64GB of eMMC storage. Compared to competing PC makers, consumers can get more bang for their buck for $549. Of course, buyers are paying for the Surface design, as well as features like a full keyboard and Microsoft's Windows Precision trackpad.

There's also a mid-tier $699 model that comes with a more-capable 8GB of RAM, but is still stuck with a 128GB SSD drive. Apple's cheapest MacBook Air model at least has 256GB as the standard storage configuration.