AppleInsider
Posted: October 13, 2020 1:58PM
in General Discussion edited October 2020
Ahead of Apple's "iPhone 12" launch, CEO Tim Cook has revealed what he calls his Apple Music playlist for this event day. 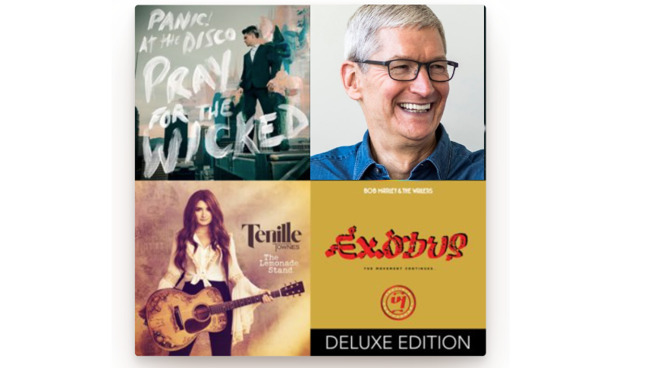 "Hey, Siri, play my event day playlist," said Tim Cook on Twitter, and included an Apple Music link to the whole playlist. The list, seemingly updated yesterday, has 27 songs and runs for 1 hour and 42 minutes.

All of the tracks are upbeat, but otherwise represent an eclectic range of artists, genres and styles. It's more than possible that there is a hint of the Apple event in the choice of music.

It begins with a trio of "High Hopes," "Whatever It Takes," and "Come As You Are," from artists Panic! At the Disco, Imagine Dragons and Tenile Townes. There are also perhaps subtle nods to cameras and photography as the rest of the list includes Johnny Nash with "I Can See Clearly Now," and the cast of "Hamilton" performing "My Shot."

The whole playlist can be listened to either on Apple Music for Apple devices such as iPhones, Macs, iPads, and HomePod, or directly online.

Alternatively, if you just want to read what's on the list and wonder whether Bob Dylan's "Tangled Up in Blue" was chosen for any particular color-related reason, here's the complete list.