AppleInsider
Posted: October 22, 2020 4:26PM
in Future Apple Hardware edited October 2020
Apple has practically confirmed the existence of its rumored "AirTags," with designs for the location tracking device surfacing showing a tightly-packed yet extremely compact accessory, as well as holsters and unexpected use cases. 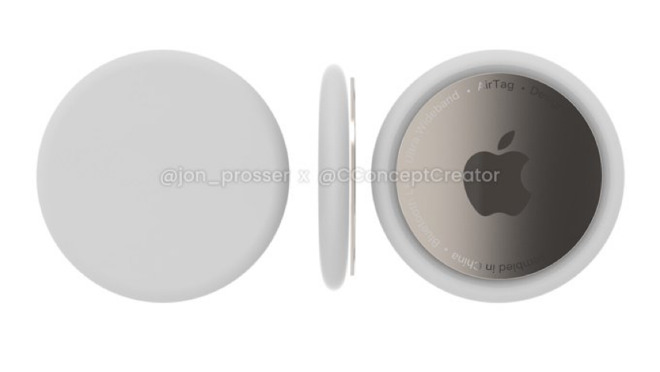 Apple has been rumored to be close to introducing its "AirTags" for some time, but outside of leaks and predictions, Apple has stopped short of admitting the product exists. The accessory is largely expected to consist of a coin-sized tracker that repeatedly broadcasts out a signal via either Bluetooth or Ultra Wideband, which can be picked up by iPhones.

Broadcasts could be picked up by other iPhones, with the position of the tracker securely encrypted and transmitted to the owner, to aid with locating lost items.

One leak indicated the tracker would resemble a white button with a metal base, revealing a compact and sleek design, but with relatively few other clues about its internals. In a pair of patent applications published on Thursday by the US Patent and Trademark Office, more detail about the internal makeup of the accessories have seemingly been revealed.

The applications, a "Fastener with a constrained retention ring" and a "Mounting base for a wirelessly locatable tag" largely discuss how the main sections of the "AirTag" fit together, but they also offer details about the rest of the tag's contents.

A cross-section showing the insides of 'AirTags'

The first handles different ways that the AirPod can be attached to accessories using a lip around the edge of the device, which would enable holders and holsters to clip or slide on. The method of attachment doesn't involve any catches on the "AirTag" itself, leaving any accessory to include fixing mechanisms to prevent it from sliding off. 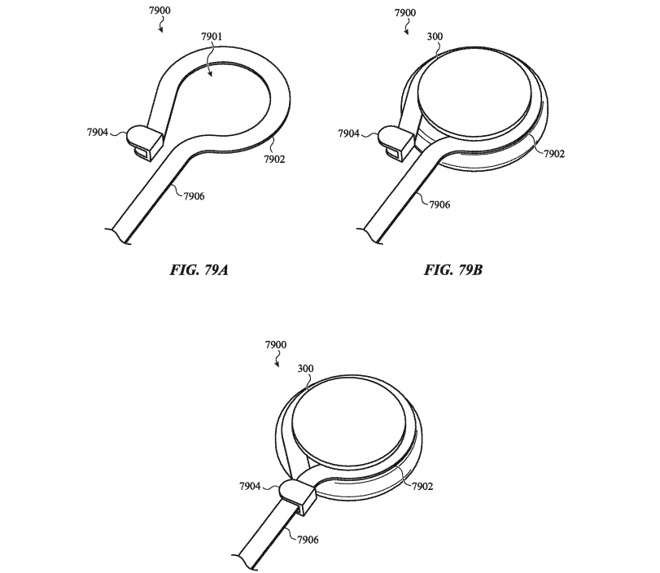 An assortment of ways the accessory could be held are discussed, such as taking advantage of a compression ring within the lip groove to maintain a coupling, keeping the assembly connected with more force.

Further delving into the patent illustrations points to a possible keychain attachment for the AirPods, with a holder that loops around a ring. The holder would separate near to the ring to allow the "AirTag" to slip inside and be visible from the front. 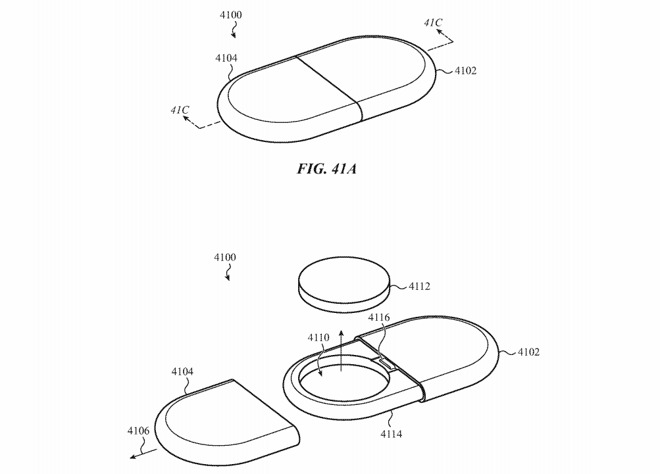 Some accessories may use covers to hold 'AirTags' in place

Other concepts for holding the "AirTag" in place include some where a cavity is made in the accessory to take the "AirTag," which is then kept in place by a cover of some description. Others also involve using wires, cables, and other tensioning mechanisms that dig into the groove.

The second handles elements of connecting the two sections together, but deals more with the base containing a button cell battery, and distributing power from the battery to the rest of the hardware. Once coupled, the battery is ideally placed to touch contacts inside the upper section, while also using the mounting base as the second contact point, with a springy base section maximizing the connection while also accounting for different battery thicknesses. 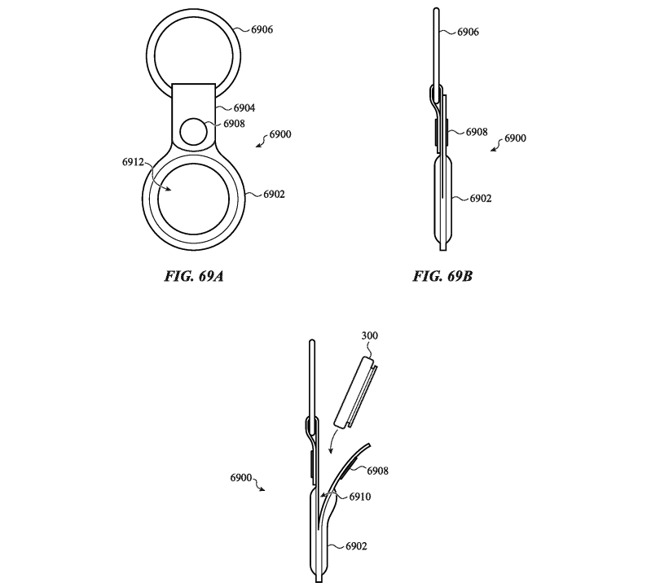 An example of a keychain holster for 'AirTags'

In one set of cutaways, it shows the tag as having a diameter approximately 50% larger than that of the battery alone, and an overall height roughly twice that of the battery. At the top edge is a cavity with a coil that could use Lorentz forces to move and vibrate, enabling it to make noises, vibrate, and even deflect and deform the cover itself.

It would also be possible for a user to press down on the domed cover, affecting the coil and potentially being registered as a press, possibly to enable and disable features, or simply to turn it on and off. 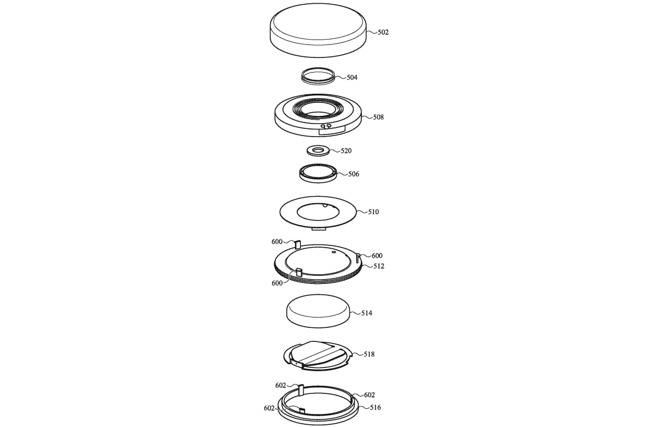 .
A component stack view for 'AirTags' from a patent filing

References are also made to an antenna assembly located above the battery, which includes NFC, UWB, and Bluetooth antennas. Rumors have suggested the use of UWB and Bluetooth, but the addition of NFC may be a way to register the tag to an iPhone user's account initially, taking into account the use of encryption in the system.

There is also an unexpected usage for the tags in the filings. References are made to "posture-monitoring," as well as monitoring movement and positions of a user's body generally by positioning the tags in strategic locations. It would be presumed the nature of UWB would be used to track the positions using a separate iPhone monitoring for tag broadcasts, rather than the tags themselves performing motion tracking.

This could conceivably tie in with a patent Apple was granted this week, about using various devices to allow iPhones to detect head movement, "body pose," and gait.
Apple files numerous patent applications on a weekly basis, but while the existence of a filing indicates areas of interest for Apple's research and development purposes, it doesn't guarantee the use of the concepts in a future product or service.

Given previous rumors and leaks, it seems quite probable that "AirTags" will see the light of day at some point, but not necessarily the wide range of methods for attaching the "AirTag" to things.

The application for a "Mounting base for a wirelessly locatable tag" was originally filed on September 26, 2019, and lists its inventors as Ryan C. Perkins, and Paul J. Thompson. The "Fastener with a constrained retention ring" filing was filed on the same day, and lists its inventors as Erik G. de Jong and Tirshathah A. Hunter alongside Ryan C. Perkins.