AppleInsider
Posted: October 27, 2020 3:24PM
in iPod + iTunes + AppleTV
Apple has rolled out an update to Apple Music on Android, one that adds enhanced sharing options as well as Autoplay and changes to search, along with a feature that hasn't yet arrived on iOS - Crossfade. 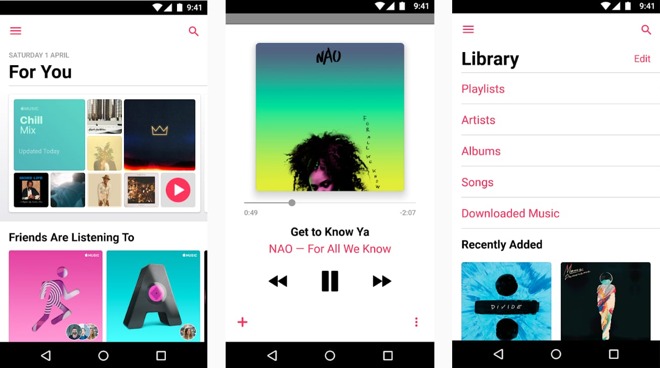 Updated on Monday, version 3.4 of Apple Music on Android includes a number of changes that brings it largely in line with iOS 14's iteration. As part of the change, the app has been given a makeover, complete with features the iOS version has offered for the last month.

These changes include an updated home page, with a new Listen Now tab instead of For You, as well as an updated layout designed to encourage music discovery as well as quick listening of favorite tracks. Under the same change, the search has been refined to include more metadata on songs, along with large category searches covering moods, genres, and specific items like "Charts."

The Autoplay feature also makes the transition to Android, with users able to let Apple Music select the next songs to play once a playlist has been exhausted. When enabled, Apple Music will analyze the playlist and select songs that seem to be similar, such as the same artist or genre.

One unusual option that Android has is Crossfade, a feature that has Apple Music overlapping the end of one song with the beginning of another for a few seconds, fading between the two for a semi-seamless and continuous listening experience. While the option is available on Mac, it has yet to be made available on the iOS or iPadOS versions of the app.

Apple Music for Android requires an Android phone or tablet running Android 5.0 or later, or a Chromebook with support for Android apps.