AppleInsider
Posted: November 24, 2020 11:16AM
in General Discussion
Apple Maps users in Austria say that transit directions are starting to appear, though as yet they do not cover all public transport. 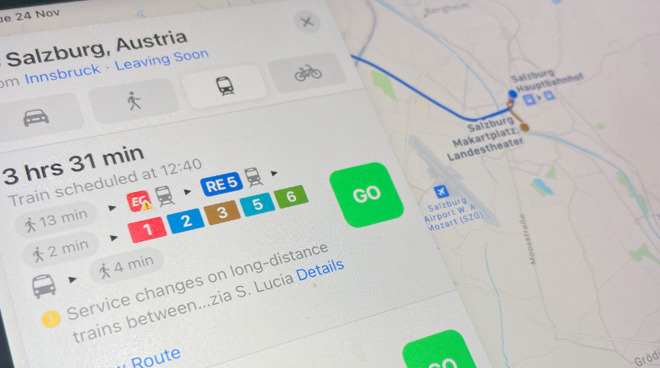 Continuing its expansion of Apple Maps features, which recently saw improvements for Portugal and also the UK, Apple has seemingly begun rolling out public transit directions in Austria.

According to readers of iPhone-ticker.de, so far only major routes appear to have timetables, however, and Apple has yet to formally announce the improvement.

Apple only occasionally announces individual country improvements, and instead just typically updates its complete list of Apple Maps feature availability. Even then, it only quite slowly updates that list, so it's most likely that the feature is steadily rolling out for all routes in Austria.

The improved transit directions for Austria follows Apple's adding this detail for other major European countries, such as France, Spain, and Germany, in 2020. Apple has stated that Europe is its focus after having completed transit details for the US.