Apple VR headset may use fluid-filled lenses to counter a user's bad eyesight.

AppleInsider
Posted: December 1, 2020 4:35PM
in Future Apple Hardware edited February 2021
An Apple VR or AR headset may be able to automatically adjust the lenses placed in front of the user's eyes by using fluids to deform the shape of the lens to improve the user's eyesight. 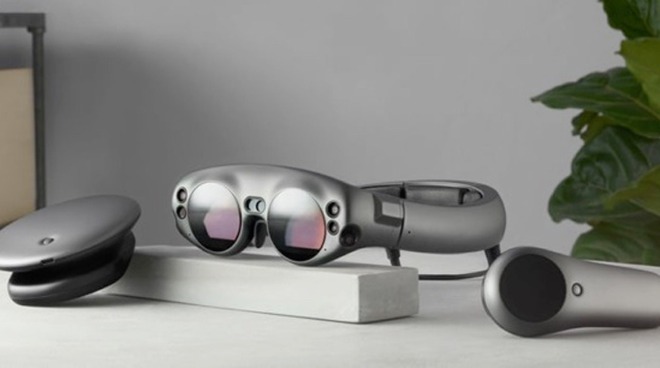 A headset by Magic Leap

The fundamental part of augmented reality and virtual reality is that the user must be able to see the virtual content. Given this typically involves the use of a display very close to the user's eyes, a position that may be hard to focus on for long periods of time, VR headset producers use optical lenses positioned between the eyes and the screen, adjusting the perceived focal distance for the user and making it more comfortable to look at.

Modern systems include mechanisms to adjust the way the lenses function for the user, such as changing the distance between the lenses to match the user's pupillary distance or the distance the lenses are from the eyes. There may be a need to change the lenses in some situations, such as if the user wears glasses and needs to remove them to wear the headset.

While the distance-related changes are relatively trivial problems, changing the lenses may not be practical. This could involve changes in the lenses between individual users who probably don't share the same eyesight issues.

In the patent titled "Electronic device with a tunable lens," Apple suggests the problem of lens selection and switching could be mitigated by using a single lens system. One that takes advantage of fluid and pressure to adjust a more malleable lens quickly and with relatively little user effort.

In summary, what App suggests is a series of lens components around a central fluid chamber that can be inflated and emptied by a connected pump and reservoir. Pushing liquid into the chamber increases its volume, pushing connected lenses out or making them flex, changing their optical properties and, therefore, what the user can see. 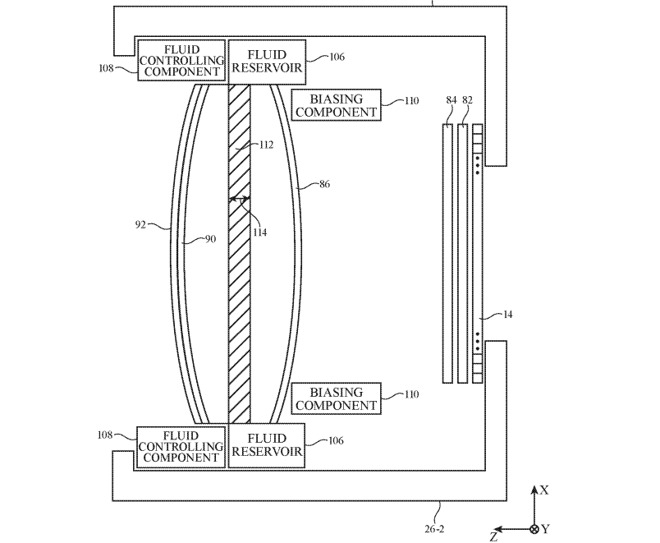 A fluid reservoir could pump liquid into a void to make lenses thicker.

As an extension of this, there could be multiple fluid chambers in use, with varying stiffness profiles, allowing for different types of lenses to be created by shaping the liquid sections rather than using it as a filler for a thicker lens. The stiffness profiles could be defined by simply having thicker membranes for the sections.

Furthering the concept more, Apple suggests the flexible lenses could have multiple actuators around the edge, which can create more adjustments to the shape of the lens, such as piezoelectric actuators or voice coil actuators. These could bend or compress the edges of the flexible element, altering the optics more.

Apple files numerous patent applications weekly, but while a patent's existence indicates areas of interest for Apple's research and development efforts, they do not guarantee the ideas will appear in a future product or service. 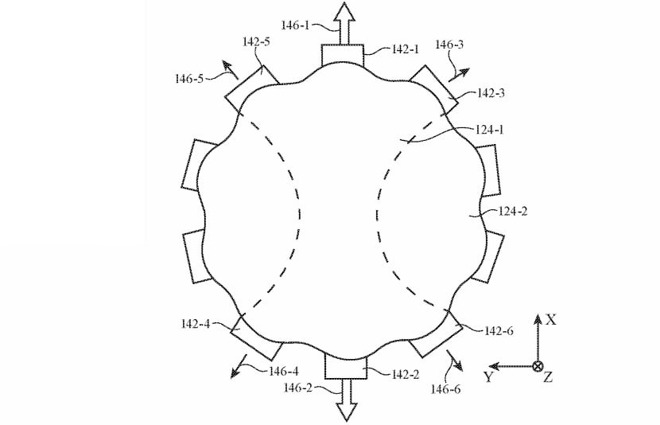 Actuators can deflect a fluid-filled lens and adjust its optical properties.

The idea of using fluids to adjust lenses isn't new, as it has been used in a variety of ways. For example, charitable efforts have attempted to distribute spectacles with water-filled lenses that could be adjusted via a syringe.

Apple is believed to be working on some form of AR or VR headset, as well as potentially creating smart glasses tentatively titled "Apple Glass." Naturally, these efforts have resulted in many related patent applications.

This includes examining the potential to use holographic imaging to lighten the weight and minimize the size of its headsets, waveguides to combine digital elements with a real-world view, and a "foveated display" for improved image processing.