Keychron K1 review: the wireless keyboard Apple should have made

AppleInsider
Posted: December 6, 2020 10:04PM
in General Discussion edited June 2021
Users familiar with the Apple Magic Keyboard will fall in love with the Keychron K1 with its slim design and comfortable typing experience. 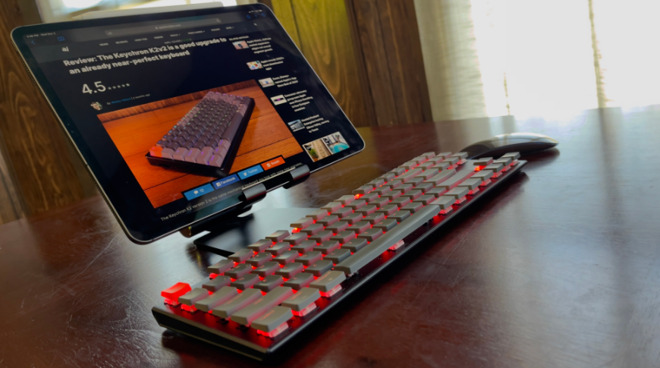 Keychron is a popular mechanical keyboard manufacturer with multiple design types and customization options. The most popular model is the larger Keychron K2 which AppleInsider reviewed at 4.5 stars.

The Keychron K1 is available in 87-key or 104-key configurations with white or RGB backlight options. Users upgrading their keyboard from the chiclet-style keys found in the Apple Magic Keyboard will find this a satisfying half-step to full-sized mechanical keyboards.

Version 4 is an iterative yet welcome update to the K1 version 3. The new features this time around include Bluetooth 5.1, curved keycaps with a new color scheme, and a caps lock indicator for 87-key keyboards.

Measuring 18mm thick, the thin aluminum body has is a slight incline in the base, unlike previous generations, meaning the keys will feel closer to your fingers as you reach. 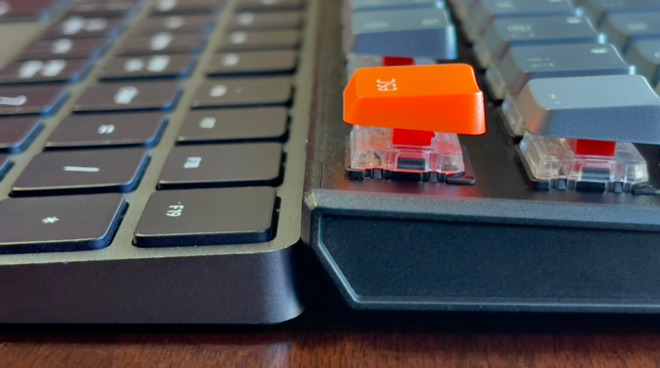 The keys have minimal travel and feel similar to the chiclet keys found in Apple keyboards. The sound isn't too loud and the key feel is slightly mushy, but it's not a detriment to the typing experience.

Though it is low-profile, the mechanical keyboard still has the proper feel and feedback expected of its class. The keys are half-height and curved slightly to feel better on the finger as you touch-type.

The key caps seem to float above the keyboard case with a transparent portion letting the light shine through underneath. The lighting feels consistent and the different patterns work great during use.

Notably, the K1 does not have any kickstands to adjust the height. There are four small rubber feet for grip, but you're fundamentally stuck with the incline.

The Keychron K1v4 uses Bluetooth 5.1 and can connect to three devices at once. Users can also connect their iPad or Mac via the USB-C port to avoid delays or disconnects that occasionally happen with Bluetooth.

The Bluetooth 5.1 standard should equate to a stronger connection while using less power than previous generations. It also means switching between paired devices faster, which is performed by holding down the function key and pressing 1, 2, or 3 to select a device mapped to that key.

The backlight can be standard white or RGB. The RGB version can cycle between 18 types of backlight patterns using the lightbulb key in the top right of the keyboard. 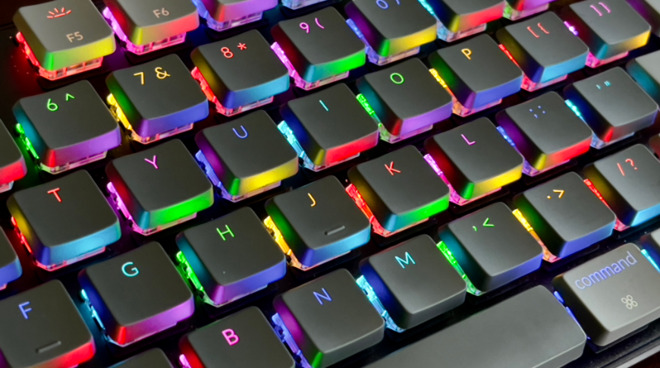 Once the desired pattern is selected, users can further customize the experience by changing the dominant color of that pattern. This is done by holding the function key then pressing the left or right arrow key to switch colors.

Keychron implemented the same 12-key function row layout as Macs, so you'll effectively have all the same buttons on your Mac Keyboard.

Like all Keychron keyboards, the K1 is designed to be universally compatible across Mac, Windows, Android, and iPadOS. Using the switches in the back, users can move between the desired operating system, and cable or Bluetooth modes.

The Keychron K1v4 87-key option now has a caps lock indicator by the escape key. Previously it was impossible to tell the status of the caps key due to the color patterns of the keyboard, but the indicator eliminates that issue.

The Keychron K1 is noticeably thin while in use. Compared to the Keychron K2, its base is much thinner, which makes use without a wrist rest much easier. Users coming from the Apple Magic Keyboard won't need to make any adjustments to their typing style due to key placement and style.

The keys are taller than the Magic Keyboard due to being a mechanical keyboard, but users won't have any trouble with touch typing.

The keys don't rock or feel cheap, and the spacebar depresses equally no matter where pressed. The design is striking, especially when the RGB effects are active.

Should you buy the Keychron K1v4? 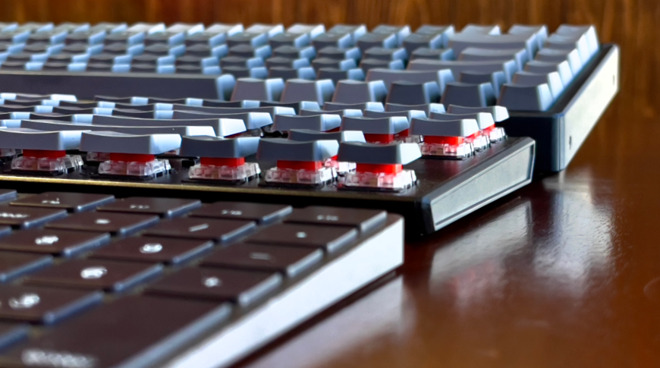 This mechanical keyboard is not for everyone. It fills a specific niche, where other keyboards like the Keychron K2 are more universal. The thin design and low-travel might turn some users away from the otherwise great keyboard.

The price is easily the best feature, as users looking for Apple's wireless keyboard will need to spend at least $30 more for an arguably worse experience.

The Keychron K1v4 mechanical keyboard can be purchased directly from Keychron's website starting at $69 for the 87-key format with white backlight. Customers can choose a 104-key option, switch to an RGB backlight, and choose between Gateron Red, Blue, or Brown switches.
«12»