Apple looking to embed antennas in screens, as well as Touch ID

AppleInsider
Posted: December 10, 2020 1:56PM
in General Discussion
Future Apple devices may make more use of the screen for providing a larger Touch ID under the display, plus improve Wi-Fi and cellular reception through embedding a bigger antenna too. 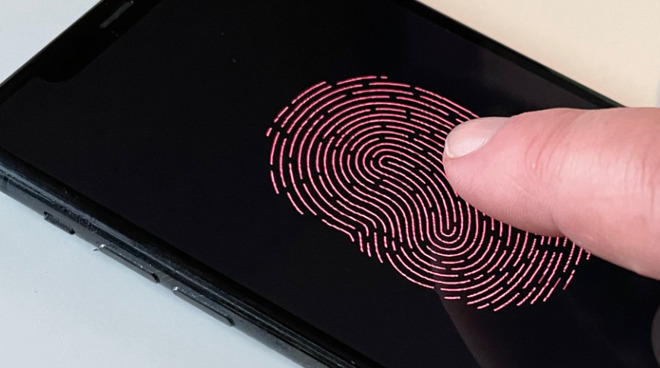 Future Touch ID sensors may be embedded within the display

It's the tradeoff that Apple has been making for years -- how to give us better signal reception, and secure user authentication, while also reducing bezels and notches. Now Apple may have found ways to get edge-to-edge displays that include both Touch ID and an antenna inside them.

Apple has repeatedly been shown to be looking at under-the-display Touch ID with patents on the topic, some concerning acoustic imaging solutions, some with infrared. The idea has also been the subject of rumors and claims from analyst Ming-Chi Kuo, and leaks on Twitter.

For all of this, though, there hasn't been much discussion about exactly why moving the sensor under the display is complex enough that Apple hasn't done it. A newly revealed patent application details the problems, and proposes solutions that involve building up a display out of layers that each do more than just pass light through.

Alongside allowing Touch ID under the display, a related patent application covers using these layers to work an RF antenna into the screen. The signals needed for Wi-Fi and cellular need antennas that are exposed, so one that took up the entire area of an iPhone display should be better than a narrow band on the side of the device.

Touch ID under the display

"Enhanced under-display fingerprint sensing using angle-focused narrow field-of-view filters," was filed by Apple in June 2019 but only now been revealed.

"Fingerprint sensing and matching is widely used as a reliable technique for personal identification or verification," it begins. Without acknowledging that Face ID even exists, the patent application then makes a case for why Touch ID is still useful.

"An optical fingerprint sensor may be particularly advantageous for verification and/or authentication in an electronic device and, more particularly, a portable device," it says. "Where an optical fingerprint sensor is integrated into an electronic device or host device... the authentication can be performed quickly, for example, by a processor of the host device."

The trouble is that if you're going to rely on Touch ID, it must be reliable and it must be fast. That's particularly a problem for when the Touch ID sensor is a small one, such as on the old Home buttons.

"The challenges facing the optical fingerprint sensor include consistency in performance over time, as the glass-air interfaces are not stable enough for small area matching," continues the patent. "On the other hand, the large-area sensors using complementary metal-oxide-semiconductors (CMOSs) are not cost-effective."

"[Then] separation of different reflection rays at various angles is another challenge, as many illumination patterns have to be used to separate the reflection rays, which leads to a long (e.g., a few seconds) image capture time," it says.

The solution would seem to be to make the Touch ID sensor larger, but not so large that it is expensive to make or takes up too much room on the device. Consequently, finding a way to put the sensor underneath the display could solve the problems.

Most of the patent application is then focused on the difficulties of emitting light so that the display can show an image, but then reflecting an optical scan of a fingerprint back into the device.

Detail from the patent showing layers of a display, with a finger (labelled 110) touching them

Apple's proposal is for a display that, "includes a light-emitting layer, an optical layer, a filter layer and a pixelated image sensor."

"The light-emitting layer is covered by a transparent layer, and can illuminate a surface touching the transparent layer and allows transmission of reflected light from the surface to the optical layer," says the patent application. "At least one of the optical layer or the filter layer enables an angle-focused FOV filtering of the reflected light."

FOV is field-of-view, and central to this patent application is the idea that the displayed image and the optical scanning for fingerprints can be done from different angles.

In one example, Apple suggests that the user's finger can be "illuminated from the right-hand side," and "the light emitted at an angle (eg 42 degrees)... can be reflected... [to] reach an imaging area."

Throughout the patent application, Apple is concerned with occlusion, where light is blocked by an object. If the fingerprint scanning is done from more than one angle, though, the device can account for the different occlusion each angle creatres.

Two of the three credited inventors -- Mohammad Yeke Yazdandoost and Giovanni Gozzini -- are also listed on a related patent application. "Sensing System for Detection of Light Incident to a Light Emitting Layer of an Electronic Device Display." is similarly about embedding sensors within a display instead of needing to hide them under bezels.

Embedding RF antenna in a display

Suggesting that Apple is determined to make more use of its displays, a second newly-revealed patent application on a similar idea is credited to a completely different team of four inventors.

In this case, "Display Integratable Hybrid Transparent Antenna," is concerned with how to embed a radio front end module (RFEM) within a screen.

"Today's wireless systems (smart watches or other devices with a predominant display feature, for example) are striving to achieve an edge-to-edge display with a smaller bezel or bezel-less display solution," says the patent application. 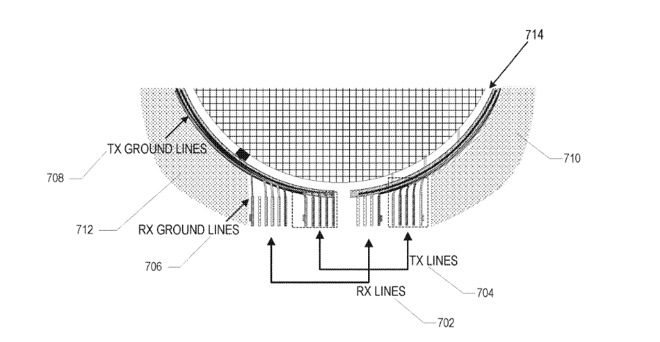 "Especially for wearable devices, such as smart watches, smart glasses, or smart health-related monitoring devices," it continues, "the display is small and the number of wireless radios (e.g., Bluetooth, GPS, WiFi, 3G/4G/LTE, FM, and so forth) that need to be supported and the related antennas is increasing."

After mentioning that, "antenna solutions for such devices can be challenging," the patent application spends 12,000 words detailing proposed solutions. The detail covers the different needs of all antennas, from Bluetooth to WLAN, but the broad principle is the same for them all.

Apple's proposal is for a device which "includes a multi-layer display, including a liquid crystal display (LCD) layer, a touch panel layer, and a cover glass layer."

There are then issues to do with getting the signals to and from the antenna. But the point is that embedding an antenna in the display creates this larger area for reception without losing any display room.