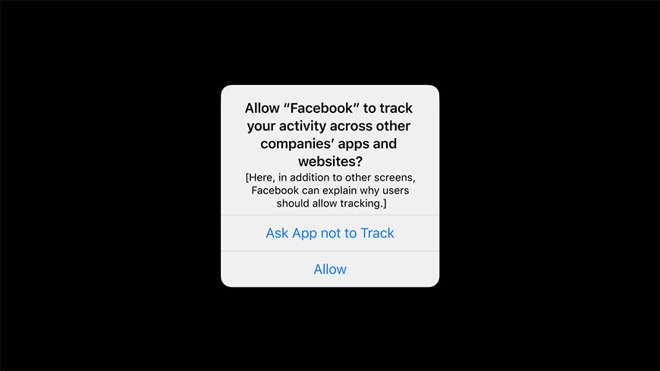 Facebook on Wednesday took out a series of full-page ads in major U.S. newspapers decrying Apple's planned implementation of ad tracking protections. The social media firm is positioning itself as champion of small businesses -- seemingly hapless victims caught up in a war between giants -- that stand to lose out on ad revenue because the regulations.

"Small businesses deserve to be heard. We hear your concerns, and we stand with you," the Facebook ad reads.

Facebook and other companies that rely on targeted ad revenue are up in arms over new system level features and developer requirements that, among other things, prompt users to deliberately opt in to ad tracking. Currently, tracking is in many cases on by default, leaving users to manually opt out of such schemes. Data is king in the world of advertising, and Facebook is known to leverage its multi-pronged platform to pump users dry.

Responding to the attack ad, Apple in a statement to AppleInsider said companies like Facebook are welcome to continue tracking users, so long as those users have a choice in the matter.

"We believe that this is a simple matter of standing up for our users. Users should know when their data is being collected and shared across other apps and websites -- and they should have the choice to allow that or not," Apple said in a statement to AppleInsider. "App Tracking Transparency in iOS 14 does not require Facebook to change its approach to tracking users and creating targeted advertising, it simply requires they give users a choice."

Initially due this year but pushed back into 2021, the feature will opt users out of ad tracking by default. Opening an app for the first time will throw up a permission dialogue box with two selections: "Allow Tracking" and "Ask Apps Not to Track," though Facebook has gone on record as saying this concession is not enough.

Apple disagrees and today went so far as to mock up a sample graphic (seen above) that illustrates how Facebook might persuade opt-ins under the Identifier for Advertisers (IDFA) system. Facebook has so far declined to adopt IDFA.

For users, app tracking transparency allows control over if, when, and how ad networks track movements inside and across apps. For example, user can revoke permissions to track at a later date in the iOS Settings app. The goal is to afford users greater control and transparency while maintaining a vibrant app ecosystem, Apple says.

In addition to IDFA and ad tracking safeguards, Apple this week rolled out so-called privacy "nutrition labels" that reveal what data an app collects and how it is used.

Facebook is reportedly planning a second attack ad for Thursday, this time claiming Apple is angling to destroy the free internet. The gist of the argument, according to BuzzFeed's John Paczkowski, is that websites and app makers will be forced to charge for content if their ability to run personalized ads is crippled.
«123»