Eve brings its HomeKit app to the Mac in latest update

AppleInsider
Posted: December 17, 2020 2:04PM
in Mac Software edited December 2020
Eve is bringing its popular HomeKit app to the Mac, allowing you to view your home, create scenes, and control accessories. 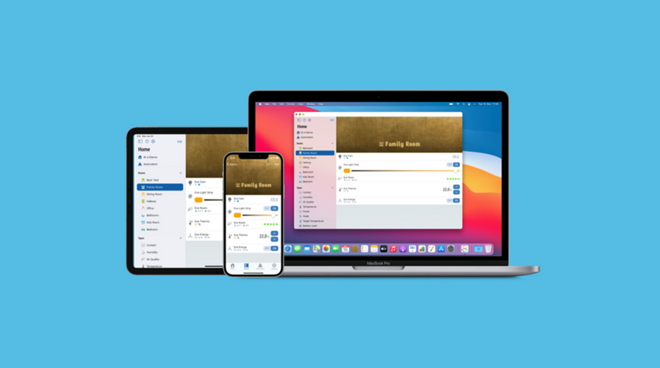 Version 5 of the Eve app extends its usefulness by launching as one of the very first HomeKit app for the Mac. The Eve 5 app for Mac has a sidebar that breaks down the different rooms and accessories in your home. Choose a room you can see the accessories inside of it and easily control them. Apple still doesn't allow you to update or add accessories from the Mac, but that is the only limitation.

This update to the Eve app also includes updates for iOS 14. Users on iPad will experience a whole new native sidebar. Eve has rewritten the app to take advantage of Apple's layout system so now users of iPhone 12 mini and iPhone 12 Pro Max will have a properly scaled interface. There is also a new dark mode app icon included in settings.

Users of Eve's latest-generation Door & Window sensor will also have a new update to support Thread now as well.

In macOS Big Sur, Apple brought nearly full support for HomeKit to the Mac, including third-party applications. Users were previously limited to Apple's own Home app which is limited in functionality.

While Eve is early to the party, they aren't the only HomeKit apps to make the jump to the Mac post-Big Sur launch. Aaron Pearce has released HomePass and HomeCam on the Mac. Scenecuts is also new to the Mac.

The Eve for HomeKit app is available now as a free download on the Mac App Store and requires an M1-based Mac.