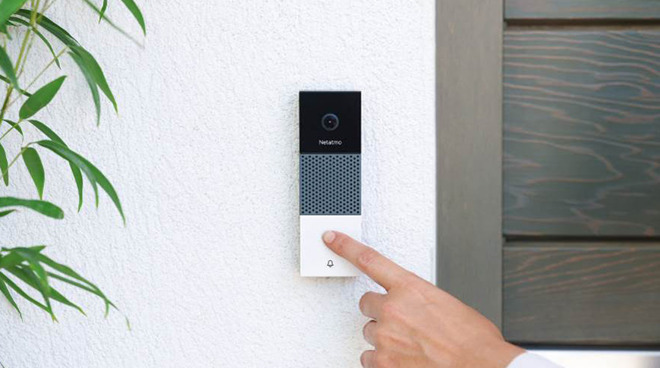 Netatmo's Smart Video Doorbell has a 140-degree field of view, smart HDR technology to handle backlit scenes, infrared night vision, and locally recorded video. Thanks to a thin-film coating, it's IP44 rated and is entirely waterproof and dustproof.

The Smart Video Doorbell utilizes Artificial Intelligence algorithms to identify between random motion and a person approaching the door. Its built-in microphone and speaker allows users to communicate with guests, delivery people, or strangers at the door. A customizable Alert-Zone enables users to define what areas will trigger motion alerts and which won't.

Homekit users can create custom scenarios to connect their doorbell to other devices, too. For instance, if the doorbell detects a person, it could turn on HomeKit-compatible lights. Additionally, users can utilize Siri to show them their front door with simple voice commands.

While Netatmo has a somewhat higher price tag, it includes premium features and no monthly fee, a departure from many other smart video doorbell brands. Users can also install the Smart Video Doorbell themselves by replacing an existing doorbell.

HomeKit Secure Video is not supported at launch. As it stands, HomeKit support allows users to call up the camera using Siri, trigger scenes or lights based on detected motion, and view the camera from the Home app. Netatmo is still promising HSV, but it will be arriving at a later date as an automatic firmware update.