Original iPhone production line from 2007 shown off in old photos

AppleInsider
Posted: December 27, 2020 2:45PM
in iPhone edited December 2020
Images dating back to 2007 have surfaced showing the production lines for Apple's first model of iPhone offer a hint of what it was like to assemble the first-ever version of the groundbreaking smartphone. 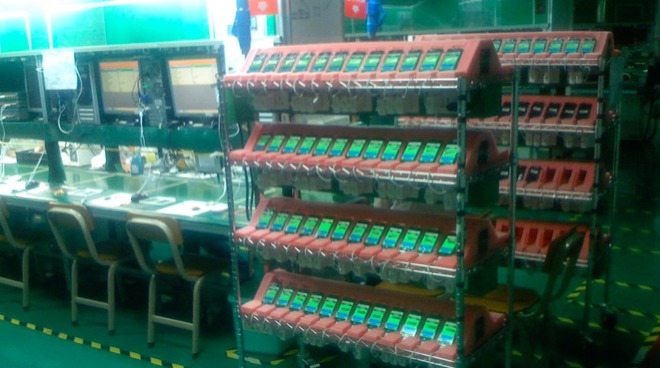 Released in 2007, the original iPhone was a major technological advancement, both for Apple itself and to the industry as a whole. The hardware has also forced assembly partners to improve their practices over time, including expanding their facilities and workforce, and how they actually assemble the products in time for release.

Photographs released by Bob Burrough on December 24 and first reported by iPhone in Canada show some of the work that went into assembling that first iPhone, with images from spring 2007 showing inside "the iPhone factory." The four images, posted to Twitter, depict a few of the latter stages of assembly, and appear to have been taken within a Foxconn facility.

Rather than actual assembly, the photographs seem to show quality assurance and testing taking place, complete with shelves of iPhones connected with wires in a mass testing rack. One shot shows test software running on units, while another has employees connecting individual iPhones up to testing equipment for final checks.

Given its original introduction by Apple co-founder Steve Jobs in January 2007 and its release months later in June, the declared spring timing for the photographs suggests that Foxconn was either close to starting full production, or had already reached it. At the time, Apple wouldn't have had the same level of supply chain control as it exerts now, so assembly and shipments were likely to have taken far longer.

Bob Burrough is a former Apple engineer, who in 2017 claimed Apple had changed to become a more hierarchical company. In 2007, the time period when the photographs were taken, Apple was organizationally "the wild west," said Burrough in an interview, with employees working outside their main roles due to projects taking a precedence over the corporate structure.

According to Burrough, current CEO Tim Cook had attempted to eliminate executive conflict within Apple, and improve the structure of middle manager, a plan that was thought to have crippled the old spirit of the company that thrived under Jobs.
Sign In or Register to comment.