AppleInsider
Posted: January 5, 2021 11:51AM
in General Discussion edited January 5
A support representative said that Belkin's MagSafe 3-in-1 charger for iPhone 12 was delayed until at least February 2021, but a representative from the company confirmed that it would launch at Apple.com on January 8. 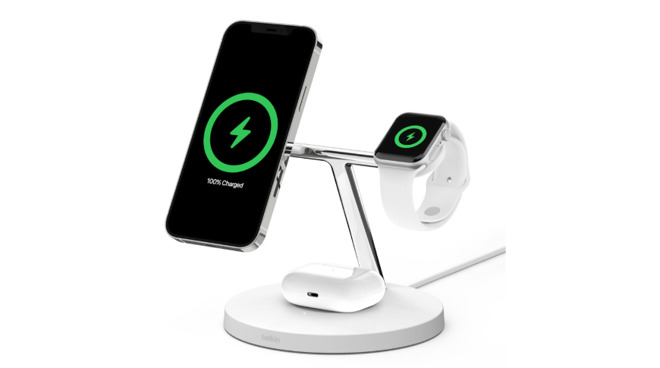 Belkin 3-in-1 Wireless Charger with MagSafe

Despite being among the first to announce a range of MagSafe accessories, a support representative has said that its chief product has been delayed. The $149 3-in-1 Wireless Charger with Magsafe, which charges iPhone, Apple Watch, and AirPods, will now not be released until February.

Belkin has not formally announced the delay, but confirmed it to a customer question in the product's Q&A webpage.

"The unit will be available in a month or so and we'll be posting updates real soon," said the spokesperson. "Please hang tight!"

Belkin itself, however, has a slightly different take on the matter. Jen Warren from Belkin has confirmed to AppleInsider that Apple.com will have the product for sale on January 8, with preorders starting on the Belkin website as well. Ship times from Belkin are not clear at this time.

The company also produces the Belkin Car Vent Mount PRO with MagSafe, which is sold for $39.95 via the Apple Store. Currently Apple lists that as shipping in between three weeks and five weeks.

Update 12:56 PM ET Added Belkin's response to our questions on the matter.