AppleInsider
Posted: January 10, 2021 8:19PM
in iOS edited January 11
The Eyeware Beam is an app for iOS devices that takes advantage of the TrueDepth camera system to allow users to track eye or head movements while they are playing a game on a PC. 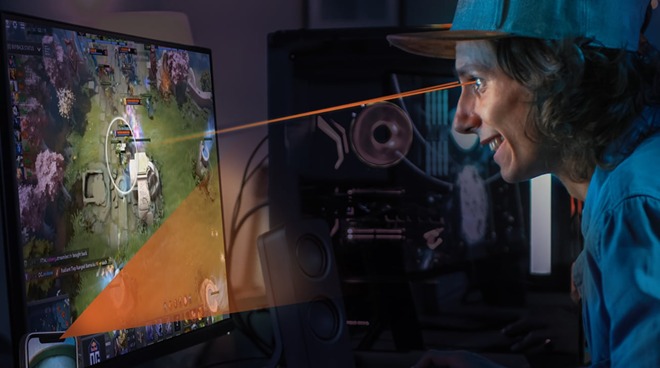 Eyeware's first consumer product shown at CES, Eyeware Beam is an app that hopes to make it easier for people to try out eye tracking and head tracking, without needing to buy a dedicated system for either task. Instead, the app uses Face ID to perform the same task.

There are a number of ways that users can take advantage of the technology, which Eyeware suggests could be useful for social media influencers to show what they are looking at when they are creating reaction videos. For gamers, eye-tracking could help inform them of how they play games, enabling serious players to learn to look at different parts of the screen.

The head tracking feature will also let simulator players use special functions in some games that can use the data, such as a flight simulator changing a camera angle based on how the player tilts their head.

As well as eye-tracking, the app also allows the iPhone or iPad Pro to work as a virtual camera for video calls and game streams, enabling a higher resolution camera to be used as a webcam.

Eyeware Beam is currently in private beta, with a public release said to be on the way. The current version works with the iPhone XS, iPhone XR, iPhone 11, iPhone 11 Pro, and iPad Pro, but should work with any model with Face ID when it is released.