Future Apple TV remote could use gestures to control other devices

AppleInsider
Posted: February 2, 2021 1:11PM
in Future Apple Hardware
An Apple TV remote or an iPhone could be used to control multiple devices in a room, with the user selecting what hardware to control by gesturing their hand-held controller in the general direction of the item they want to command. 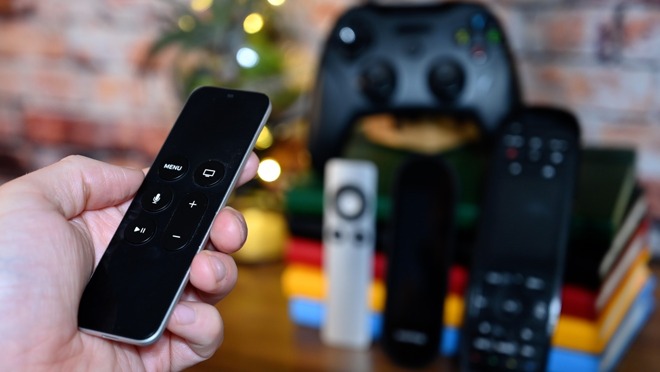 In the beginning, remote control systems were created so that one controller could affect one device, such as a TV remote controlling a single television. As technology progressed, it became possible to control multiple devices using the same controller, such as one that could control both a TV and a VCR.

It has evolved to a point that devices like the iPhone can be used to control many different types of hardware, typically by running a related app and tapping software buttons.

While the number of devices that can be controlled has increased over time, one thing that hasn't changed is selecting which device to control in the first place. Regardless of system, the user has to pick out and select the type of device they want to control on the controlling hardware before being able to control it.

For extremely small controllers with few buttons and feedback mechanisms, such as the display-less Apple TV remote, there's no feasible way a user would be able to select a different device with a limited interface.

In a patent granted by the US Patent and Trademark office titled "Controlling electronic devices based on wireless ranging," Apple suggests a system where the user can select the device they want to control by the position and orientation of the controller itself.

In short, a user could instruct a remote controlling device to command a television or a speaker that it is being pointed in the general direction of, rather than pressing a button to switch the device being controlled. 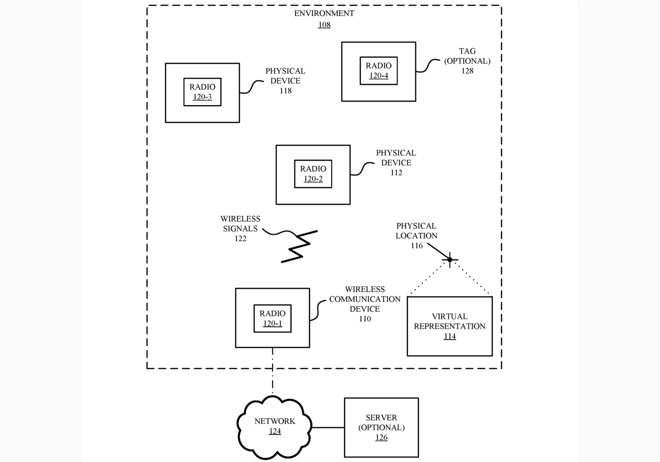 The remote could feasibly communicate with multiple radio-based devices, as well as allowing for virtual devices in a room.

When a user performs a gesture with the remote, such as a thrust or a jiggling motion, the remote could determine this as intent to control something, which then prompts the remote to start determining what needs to be controlled.

By using wireless ranging to determine the distance between the remote and nearby controllable objects, as well as the orientation of the remote itself, the remote would in theory be able to work out what the user wants to control, then perform actions to control that particular device.

The system could use wireless transmission characteristics or computations to work out the distance, as well as other systems like detecting ultrasonic chirp sounds emitted by other devices and picked up by the remote. A gyroscope, compass, or accelerometer could be used to work out the orientation of the device itself .

Apple suggests it could be used to control many different types of object, including computers, displays, printers, audio devices, appliances, home automations, environmental controls, and accessories, but it may also be used to control virtual objects.Using a proxy object in a room that isn't directly controllable, the remote could interpret being pointed at specific places as an intention to control another thing outside of the room, like a thermostat. 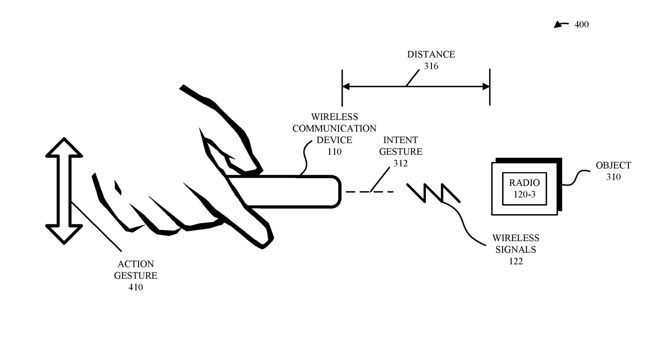 Gestures could be used to initiate the control of a specific device, as well as to instruct the kind of adjustment the user wants to perform.

The patent lists its inventors as James H. Foster and Duncan R. .Kerr. It was originally filed on July 29, 2019.

Apple files numerous patent applications on a weekly basis, but while the existence of a patent indicates areas of interest for Apple's research and development efforts, they do not guarantee that the concepts described will be used in a future product or service.

Apple has repeatedly covered the idea of a universal gesture-controlled remote in patents, with the concept surfacing every so often over a number of years. In 2009, it was looking to create a Nintendo Wii-like Apple TV remote control, with relative position detection in a remote appearing in a 2012 patent, as well as a "remote wand" controller for Apple TV in 2014.

A universal remote concept has floated repeatedly too, with the 2012 patent application suggesting a touchscreen-based controller for managing multiple devices. A 2013 patent suggested a system for "saving and restoring scenes in a multimedia system" using an iPhone.

In more recent patent filings, the February 2020 application for "Object tracking and authentication using modular wall units" suggested using positioning technologies in electrical outlets to assist with positioning and setting up new hardware in a smart home network. Ultrasonic position location detection has also appeared in other patents, such as the filing for an AR or VR headset that can detect the surrounding area.