AppleInsider
Posted: February 9, 2021 2:53PM
in Future Apple Hardware
Apple's long-rumored AR and VR efforts including "Apple Glass" could use smart gloves to interact with the system, using magnetic fields to determine where a user's individual fingers are located. 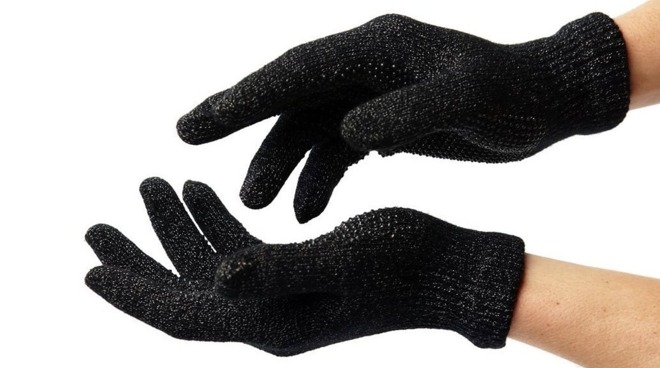 One of the issues with current-generation VR headsets is a need to use hand-held controllers. While existing systems can be used to tell where hands are in relation to a helmet, they aren't capable of accurately working out where a user's individual fingers are positioned.

Furthermore, hand-held controllers may not allow users to grab onto other objects, something that could be needed in some AR applications. This may be especially true for Apple Glass, rumored AR glasses that may need to rely on controller-less interaction in the future.

In a patent granted to Apple on Tuesday by the US Patent and Trademark Office titled "Magnetic sensor based proximity sensing," Apple suggests it could create smart gloves that can accurately pinpoint a user's fingertips.

Apple claims it can do this via magnetic sensing. This is the practice of using disturbances in magnetic fields to measure location and positioning of magnetic sources, or the position of a sensor from a magnetic source.

In a glove, Apple suggests a coil-based magnetic field generator with a specific modulation could be positioned on the back of a hand. Magnetic sensors attached to each fingertip can demodulate the magnetic field, which helps determine the distance between it and the source.

By using multiple magnetic sources, such as two on the back of the hand and one in the palm, the system can also feasibly work out the 3D positioning of each fingertip. 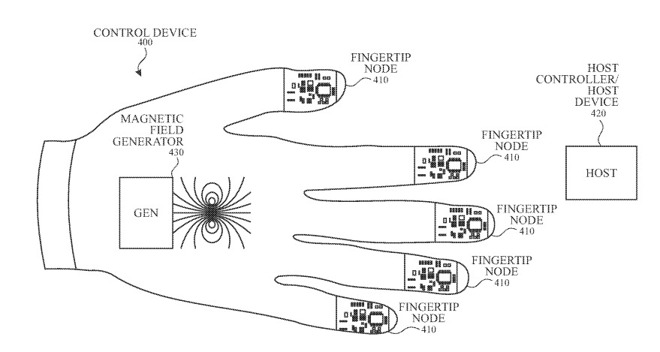 The fingertips hold sensors that can detect the magnetic source on the back of the glove.

This would potentially leave a lot of space on the glove to add other components, including touch sensors, actuators for haptic feedback, temperature sensors, and heaters. Batteries and a communication system with the rest of a VR system can also be included.

The patent lists its inventors as Jian Guo, John Greer Elias, and Savas Gidler. It was originally filed on February 19, 2019, and first surfaced to AppleInsider in an application filing in August 2019.

Apple files numerous patent applications on a weekly basis. While the existence of a patent indicates areas of interest for Apple's research and development efforts, they do not guarantee the concepts will appear in a future product.

The rumored Apple VR and Apple AR projects, along with Apple Glass, have thrown up many patents in the past. Some of those patents have shown Apple is certainly working on solving the interactivity problem.

This has previously included finger clamps that squeeze fingers to simulate typing on a keyboard, force-sensing garments, eye-tracking systems, and other methods.

On the VR and AR side, the patent for "Computer Systems with Finger Devices" suggested the use of fingernail-mounted attachments to sense positioning and other factors.

An "expandable ring device" has also been touted in a patent in November 2020. The expanded section, which covers part of the finger, could be used to detect finger movements as it bends and flexes.

There is also the possibility of using LiDAR in such a system. A patent from the same month offered the use of LiDAR to perform object tracking, rather than relying on video feeds, while also opening the possibility for controller-free hand tracking.