AppleInsider
Posted: February 16, 2021 2:14PM
in iPad
Apple is investigating how a future Apple Pencil could offer more variety to its users, by having interchangeable nibs that can change what the stylus can do. 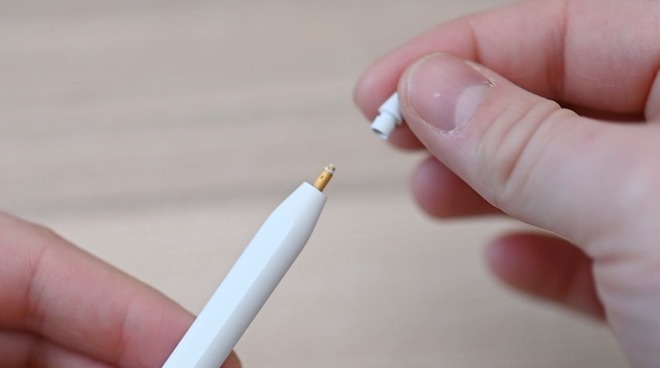 The current Apple Pencil nib can be replaced, but it doesn't change the functionality.

The Apple Pencil is a sophisticated drawing device by design. Its core function of allowing users to draw on an iPad display, but its underlying technology is complex, enabling pressure sensitivity from pressing the nib down.

As part of the design, the nib of the Apple Pencil can be exchanged for another if required. This largely centers around the nib wearing down with use and needing replacement, rather than from a need to alter its mechanical properties.

Existing nib mechanisms also work on the idea that the tip won't change function, that it will always be used to detect pressure changes over time.

In a patent granted to Apple on Tuesday by the US Patent and Trademark Office titled "Multipurpose stylus with exchangeable modules," Apple proposes there could be more to nib changes than maintenance. Instead, Apple proposes that the nib could allow for function changes.

In terms of design, Apple suggests that an Apple Pencil nib section could separate from the barrel of the accessory. A small connector enables another nib section to be attached and to communicate with the rest of the body. 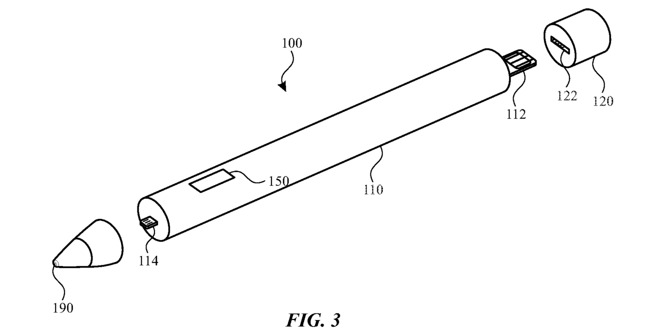 The nib of the Apple Pencil is envisioned to fit on via a small connector on the end.

The nib would contain all of the mechanisms, electronics, and processing required to function, with the connector transmitting data to the body. The body would include controllers, a power source, storage medium, haptics, a button, and a communications method with a host device.

As the nibs change, the data that would be presented to the body components would vary. However, the body's supportive functions will persist between nibs, as they are required for general Apple Pencil usage.

This changing data could be more than just pressure, and could cover many different types of data. Apple proposes this could change a setting of "a color, a shape, a thickness, a size, a brightness, or an opacity" of a marking.

By changing the nib and the data, it could be feasible that the nib data could offer different effects in drawing applications. For example, it could give enough opacity, thickness, and shape data to simulate brush strokes, while color could be used to trace an item or copy a color from a printed swatch.

The filing suggests the nib could contain several different sensors for varying purposes. The component list includes tactile sensors, contact sensors, capacitive and touch sensors, a camera, a piezoelectric sensor, a pressure sensor, or a photodiode.

The assembly may contain other functions, including orientation detectors, a gyroscope, accelerometer, biometrics, a display, switches and buttons, a compass, and voice coils and speakers. 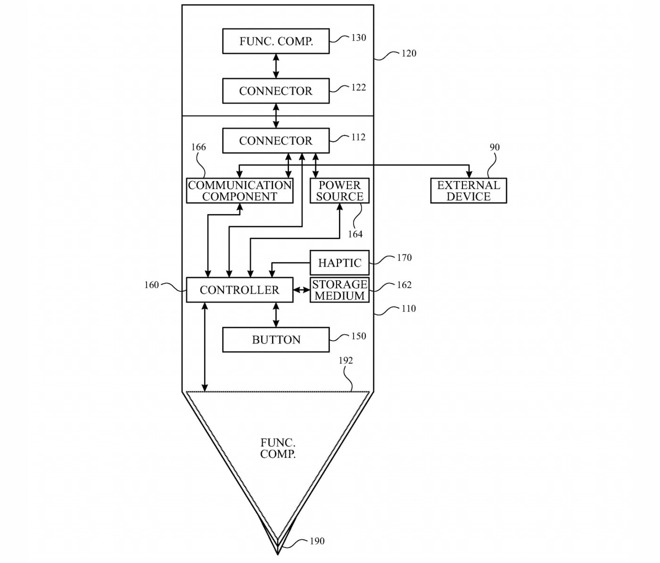 The nib would handle processing for the function, passing data on to the Apple Pencil's body.

Apple files many patent applications every week. While a patent's existence indicates areas of interest for Apple's research and development efforts, there's no guarantee it will appear in a future product or service.

This is far from the first time Apple has considered alternative functionality for the Apple Pencil by altering its nib treatment. It's also not the only patent relating to swapping nibs.

In 2016, a patent for an "Intelligent stylus" offered the idea of interchangeable nibs with different functions. That patent included the use of unique identification codes read by other sensors within the stylus body, whereas the latest filing suggests data transmissions would determine functionality.

Using the nib for other functions has also been proposed in the past, including one from July 2020 where it could be used to detect and sample colors on an object using photodetectors. Tip adapters have also been proposed in another filing, adding a force-sensing button to the existing Apple Pencil design by applying negative pressure to the nib.