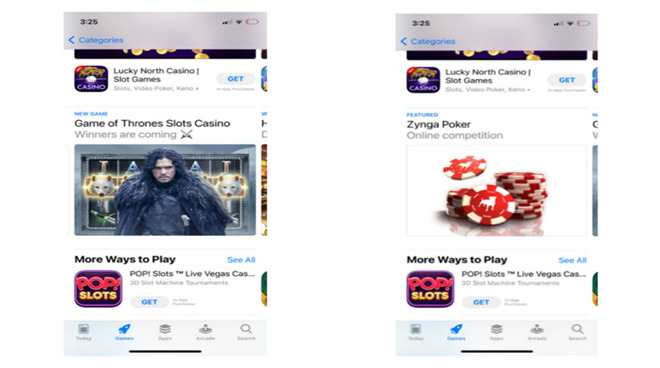 Lodged with the U.S. District Court for the Northern District of Columbia, the suit takes issue with free-to-play games that offer micro-transactions, or in-app purchases, for digital currency or other forms of digital goods.

Plaintiffs name "Zynga Casino Apps" as violating a number of state statutes related to gambling, saying Apple is culpable in the scheme by providing iOS development tools, hosting the titles on the App Store and profiting from their sale. As the sole administrator of the App Store, Apple allegedly "permits and facilitates illegal gambling by operating as an unlicensed casino," allowing users to buy "coins" or "chips" for use in Las Vegas-style games like blackjack, roulette, poker, keno, bingo, and other card and gambling games.

Most games mentioned in the suit present a limited number of chips to start, but users must purchase additional virtual funds once that pot is exhausted. The consumer will ultimately run out of coins or chips and "will be prompted to use real money to purchase additional coins or chips for the chance to continue playing the game," the suit alleges.

Importantly, according to plaintiffs, users are unable to collect actual cash in the casino games, but they do have the ability to win and therefore acquire more playing time. This system -- paying money for a chance to win more playing time -- allegedly violates anti-gambling laws in the 25 states at issue in the case.

Causes of action include violation of the Civil Remedy Statutes for Recovery of Gambling Losses and unjust enrichment. Plaintiffs seek an injunction, damages, restitution, and legal fees.

The suit is nearly identical to a case filed in October that claims gambling apps violate state laws by prompting users to pay real money to acquire more playing time. A more recent complaint, filed in January, takes issue with the addictive nature of casino-style games.