AppleInsider
Posted: February 18, 2021 2:45PM
in General Discussion
Apple is researching how to embed sensors into display panels, potentially enabling both Touch ID, and Face ID without a notch. 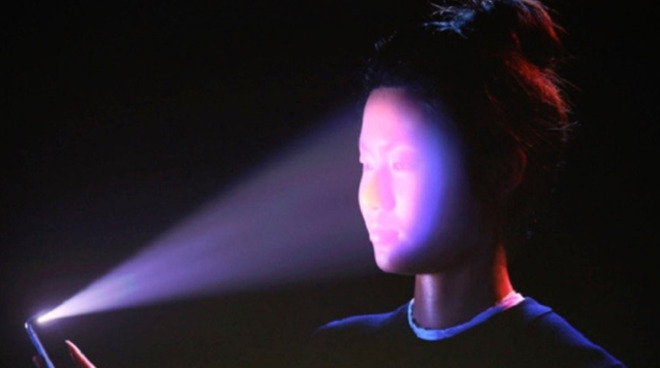 Future Face ID may not require a notch

Many of Apple's recently revealed patents and patent applications, have been concerned with making more use of necessary components. That's included a battery that doubles as a haptic feedback engine, and embedding Wi-Fi antennas in screens. Now Apple appears to be looking at just how much else can be included within an Apple Watch, or iPhone display.

"Photodetectors Integrated into Thin-Film Transistor Backplanes," is concerned with a TFT screen. Even as a display presents images, it can be simultaneously include sensors that detect a range of environments.

"An array of photodetectors may be variously configured as a biometric sensor, camera, or depth sensor, for example," says the patent application, "and may be used to generate an image (a 2D image), a depth map (a 3D image), or a video clip (a sequence of 2D or 3D images)."

These are all functions that sensors can currently do, but Apple is focusing on getting more from these sensors -- and do so in newer forms. That does include less expensive forms, but also thinner ones.

"Given the wide range of sensor applications, any new development in the configuration or operation of a system including a sensor can be useful," says Apple.

Apple's proposal is to either embed photodetectors within a TFT screen, or alongside one. These sensors may "be positioned behind a display," or "be attached to the display."

Most of the patent application, though, is concerned with how such a photodetector can be included within the display. It would "be attached to the multi-layer structure," and include "an organic photosensitive material."

Ultimately, what this means is that the screen you look at can be looking right back at you. And doing so without adding appreciably to the thickness of the screen or the device.

Photodetectors register light, so it's conceivable -- and the patent application mentions this -- that such an embedded one could be an actual camera. More specifically, it could be a Face ID camera. 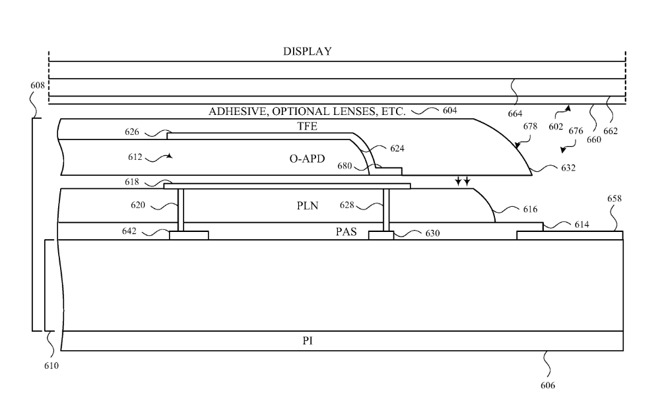 "[The] the array of photodetectors... may be configured to operate as a front-facing camera, a bio-authentication sensor, or a facial recognition sensor," says Apple. It may do this "alone or in combination with other sensors."

So such a display, with such sensors embedded within it, may be equally able to be used as either Face ID or under-the-screen Touch ID.

This patent application is credited to six inventors. One of whom, Jiun-Jye Chang, previously worked on a patent for a touch panel with photodetectors.