AppleInsider
Posted: February 23, 2021 1:48PM
in Future Apple Hardware
A HomePod could potentially help save lives without getting into contact with other people, with Apple looking into 360-degree radar systems that can detect vital signs and medical conditions of individuals. 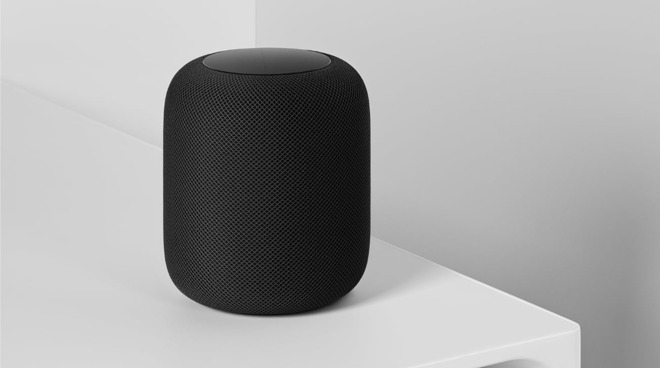 This can result in knowing the general direction of an object as well as roughly how far away the object can be, which may not be enough for some applications. For example, it doesn't provide fine-tuned positioning details, such as accurate distances, vertical position, or how it is angled.

There's also the matter of knowing the location of an object, with no further data points on what it could be.

In a patent granted by the US Patent and Trademark Office on Tuesday entitled "Electronic device with circular radar-antenna array," Apple envisions a system that could potentially provide more accurate positioning data, as well as other information.

Apple's system consists of a arrays of radar transmitters and receivers located within an electronic device. The arrays are positioned in a circle, to provide complete 360-degree coverage of areas surrounding the device.

By using subsets of the transmitters at a time, the synchronized receivers can pick up reflected signals at different times. Using circular beamforming, the system could determine the precise location of a nearby object in relation to the device, at least on a horizontal plane.

Adapting the subsets dynamically could allow for improved reception of reflected signals for the system, making it more accurate. This could be useful for follow-up pings, to track an object's motion or to pick up physical details about the object, like its size or shape. 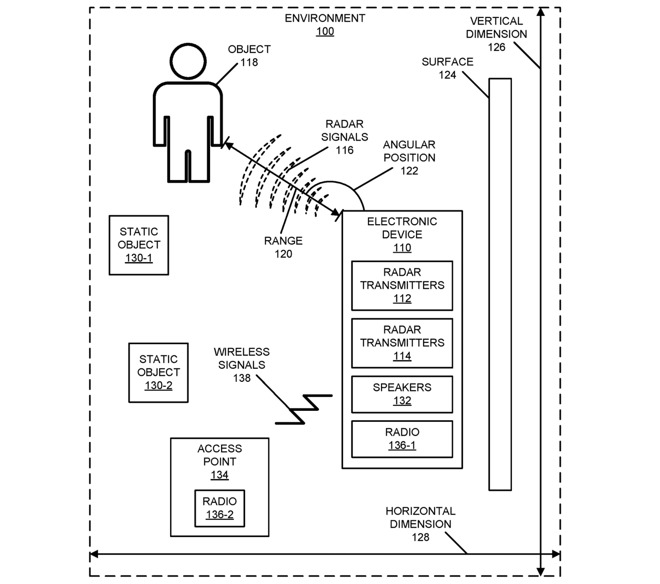 Such a system may not necessarily be limited to just one radar array. By using two arrays at the top and bottom of the device and alternating which set of transmitters work with which receivers at a time, this could allow for vertical positioning data and other 3D details.

The system would also adapt to its surroundings. For example, if the array was placed next to a wall or another flat surface, it would be feasible it could detect the surface and disable elements of the array near to it.

Such a change would limit the amount of useless data the device would receive from the immediately-reflected pings, which could also affect other receivers in the array.

Some of the claims indicate that the system could be employed to perform tasks other than simply detecting the positions of unknown items nearby. In one claim, it is suggested the device could be configured "to identify the individual based at least in part on the radar measurements." 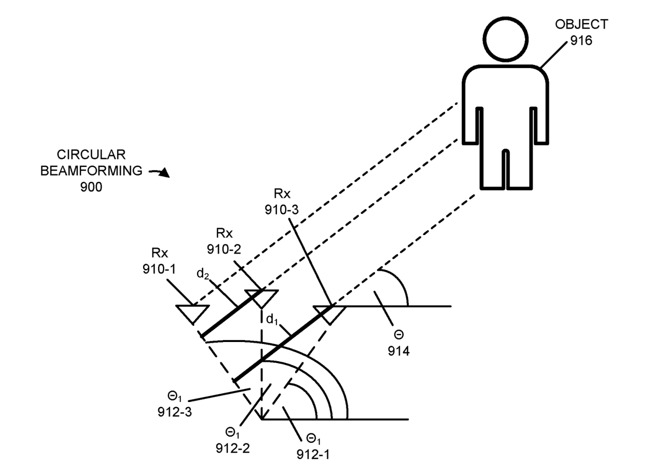 An illustration of circular beamforming detecting a nearby object or person.

These inclusions suggest that the device could be useful to provide health and fitness-related functionality.

The patent lists its inventors as Chunshu Li, Jouya Jadidian, Mikheil Tsiklauri, and Vaneet Pathak. It was originally filed on September 18, 2018.

Though Apple files numerous patent applications each week, they do not usually guarantee the future appearance of the idea in a product or service. They do, however, advise of areas of interest for Apple's research and development teams.

Based on the description, it seems that Apple may already have some hardware that could provide elements of this functionality.

The HomePod is a device that has a six-microphone array and a seven-tweeter array. The microphone array enables the HomePod to perform advanced echolocation processing, allowing it to accurately hear the user for Siri commands, even with loud music playing.

The beam-forming capabilities of the smart speaker also allow it to sense its placement within a room, including the size of the space and whether there are nearby obstacles. This data is then used to optmize any audio output to best suit the environment.

While not specifically radar, nor using multiple microphone and speaker arrays, the capabilities of the HomePod at least hint at what Apple is looking into with the patent.

A patent application that surfaced in March 2020 titled "Electronic Device with Co-Located Independent Radar Transceivers" attempted to answer the same issue as the new patent. While it largely covered determining which person in a group is making a Siri query, it also proposed detecting vital signs remotely, such as a pulse, blood pressure, respiration rate, or a medical condition.

Jadidian, Pathak, and Tsiklauri are also identified as inventors for that filing.

Apple has also pondered using HomePod technology to provide environment sensing and audio refinement for the MacBook Pro in another filing from November 2020.