AppleInsider
Posted: February 23, 2021 3:24PM
in General Discussion
Apple is developing a method to provide better quality control for microLED displays, which carry a number of benefits over OLED and could be used in future devices like an Apple Watch or iPhone. 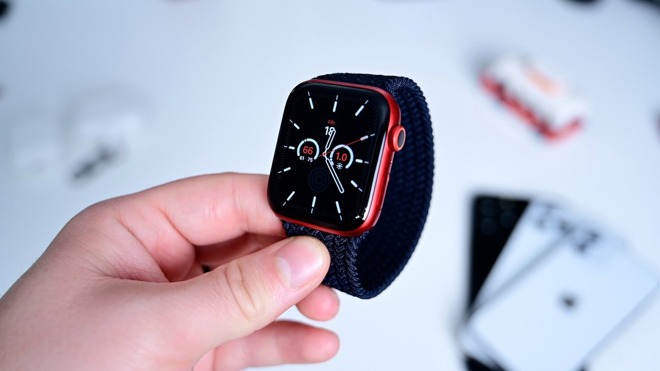 However, as Apple notes in a patent granted Tuesday, microLED displays have a downside. They rely on "pick-and-place" techniques and bonding technologies that are prone to certain placement or bonding imperfections. Because of that, the ability to test a microLED display during the production process is critical.

That's the system that Apple lays out in the patent, titled "Micro light emitting diode testing."

Using specific testing apparatuses and architectures, Apple describes a method that could identify and pinpoint specific microLED or row/column drivers before they've been placed on a display.

The system is designed to catch any defects or LEDs operating at a substandard level before the bonding process. Once a problem is detected, it can be fixed in an easier and more efficient manner.

"A determination is made, by the controller and/or a separate controller whether the microdrivers or the connected LEDs are functioning properly," Apple writes. "In some embodiments, this determination may be made from optical scans of the display. Additionally or alternatively, the driving circuitry currents and/or voltages may be measured to determine of an expected drop is occurring across the pixels that is expected when the LEDs and microdrivers are functioning properly."

The testing can be more specific and divided into different classifications. If the luminance of a parter of the display is below expectations, Apple could carry out a closer test to see if specific LEDs have failed or if a microdriver has caused a number of LEDs to perform poorly.

Apple first filed for the patent in March 2018. It lists Mahdi Farrokh Baroughi, Bo Yang, Xiang Lu, and Hopil Bae as its inventors. Of them, Bae has previously been named on a patent related to adaptive brightness control.

Patents don't give any sort of indication when the technology they describe may debut. More than that, Apple files and is granted numerous patents on a weekly basis, so they aren't a guarantee of future plans.

However, past reports indicate that Apple is mulling the introduction of microLED displays in an Apple Watch in 2023 or 2024. Foxconn is also said to be working to win orders from Apple for microLED iPhone displays.