Apple researching how to make 'Apple Glass' self cleaning

If you wear glasses, you also have a cloth you use to repeatedly clean them, and you may still need to wipe over "Apple Glass." However, a newly-revealed patent application shows that Apple is looking to keep the inside of the device clean by itself.

The newly-granted patent, "Particle Control for Head-Mountable Device," discusses how a device could itself remove dust or other debris, from what Apple refers to as "optical modules."

"The quality of the view provided by the optical module can be dependent on the clarity of the optical pathway between the source of the image and the eye of the user," says the patent application.

"For example, particles (e.g., dust, debris, foreign object, and/or other materials) along the optical pathway can obstruct, distort, and/or otherwise adversely affect the view provided to the user," it continues.

"In particular, where a display element includes a high-resolution display, such particles on a surface of the display element can block entire pixels and/or multiple pixels, such that the image transmitted to the user is altered from its intended form," says Apple.

According to Apple, this is a problem that only increases "during the lifespan of the head-mountable device." And it can happen even if the device is "sealed to prevent and/or limit ingress of substantially all particles from an external environment."

Over time, "degradation, erosion, friction, wear, and/or aging of components," can mean that, "particles can migrate," or "collect on the display element."

Apple's proposal is that the device itself works to remove dust, capturing "the particles so they do not interfere with the user's view of and/or through optical elements." One way this could be achieved is by vibration. 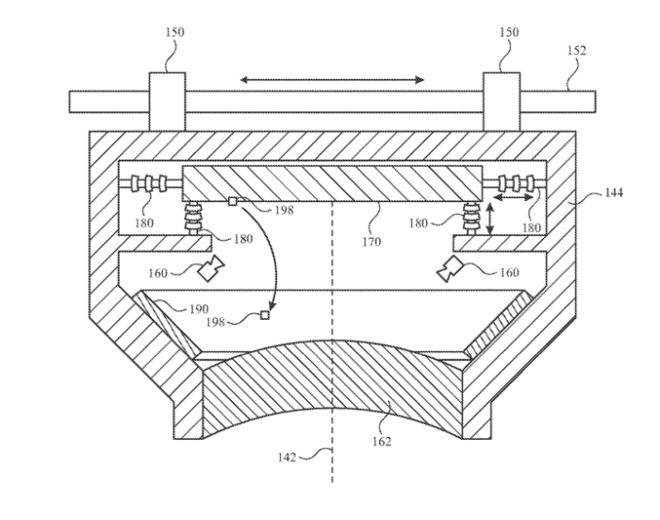 Detail from the patent application showing different ways a lens, or other optical device, could be moved to dislodge debris

"For example, the display element and/or another optical element can be moved in a manner that releases particles on a viewing surface thereof," says the patent application. "The optical module can include a particle retention element that securely retains the particles so that they remain outside of the optical pathway."

So "Apple Glass" could shake such dust particles free, and collect them somewhere safely out of the wearer's view. This shaking could be done automatically as the device detects an issue, or when the wearer chooses to use it.

The patent is credited to five inventors, including Ivan S. Maric. His previous work for Apple includes a design for how a MacBook Pro could adopt a HomePod style sensing of its environment.