AppleInsider
Posted: March 1, 2021 2:10PM
in Current Mac Hardware
AMD will be expanding its Radeon RX 6000 graphics card line on March 3, with the launch thought to introduce lower-priced options that could eventually be used with the Mac Pro or eGPU solutions. 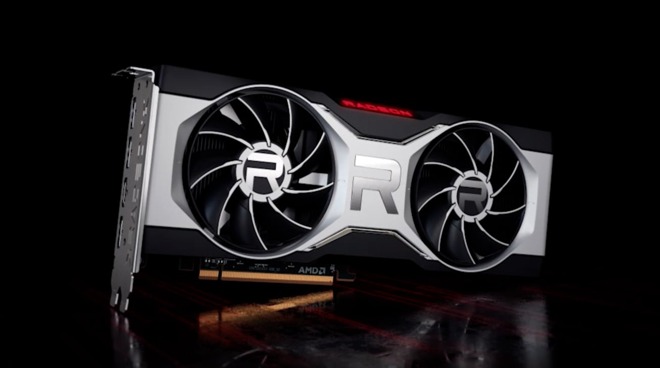 The tweet proclaims "the journey continues for RDNA2" at 11 A.M. Eastern on March 3. The event will be the third episode of AMD's "Where Gaming Begins" virtual event streams, and is confirmed via the tweet to include at least one new card.

On March 3rd, the journey continues for #RDNA2. Join us at 11AM US Eastern as we reveal the latest addition to the @AMD Radeon RX 6000 graphics family. https://t.co/5CFvT9D2SR pic.twitter.com/tUpUwRfpgk

Current speculation is that AMD's next card will be one that extends the range down toward the value end of the spectrum. Thought to be the Radeon RX 6700 XT, images and details of the cards leaked by VideoCardzon Sunday indicate Asus is already preparing versions for sale.

The card may also switch out the 16GB of GDDR6 memory for 12GB as a cost-saving measure and use a 192-bit memory bus instead of 256-bit. A lower memory bandwidth may also be revealed, with it being capable of up to 384GB/s rather than 512GB/s performed by its stablemates.

It will likely provide some power savings, with a power consumption of up to 230W undercutting the RX 6800's 250W power draw or the 300W of the higher two cards.

The card is likely to be a potential future upgrade for Mac Pro users and those with Thunderbolt 3 eGPU enclosures, though not at the moment. Drivers do not yet exist for macOS for the RX 6000-series cards, but are anticipated to arrive soon, given historical trends for addition of support.