MagSafe connector could return and replace Lightning on iPhone

AppleInsider
Posted: March 2, 2021 5:31PM
in Future Apple Hardware
Apple's MagSafe connector that it popularized on the MacBook Pro could make a return in the future, with Apple researching the use of a revised version as a replacement to Lightning as it potentially moves to a "portless" iPhone design. 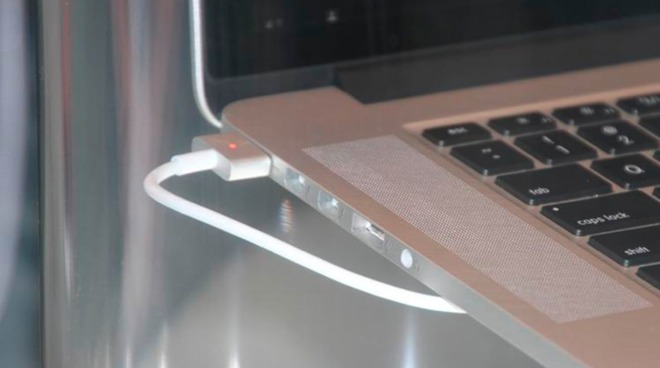 A MagSafe connector attached to a MacBook Pro

The introduction of MagSafe as a way to attach accessories to an iPhone and to improve wireless charging has led some to reminisce about its predecessor. The original connector using the MagSafe branding allowed for the safe charging of a MacBook Pro.

The system centered around the idea of allowing the power cable to be yanked free from the MacBook due to being held in place by magnets. Doing so meant there were fewer accidents where a MacBook would fly off a surface and onto the ground, pulled by a power cable tripped over by a user.

Switching away from the MagSafe connector in favor of USB-C connectors prompted alternatives to be made, for those still concerned it was a safety hazard. This includes the Vinpok Bolt-S cable, which mimicked MagSafe's main features but was usable on modern MacBook models.

At the same time, there have been suggestions the long-lasting Lightning port of the iPhone may be at risk. Rumors have proposed a port-less iPhone could be on the way, eliminating the Lightning port to make the iPhone more water tight and to improve the aesthetics.

Apple is also said to be working on software and hardware solutions to restore an iPhone, without using a traditional physical data cable connection. This again paves the way for a port-free iPhone design.

In a patent granted to Apple on Tuesday by the US Patent and Trademark Office titled "Magnetic surface contacts," Apple seemingly offers the idea that MagSafe could return, and could feasibly do so on an iPhone.

The original MagSafe consisted of a series of shallow pins stored within a rectangular section, which would fit into a specific recess in the side of the MacBook. Contacts within the middle of the recess would touch the spring-loaded pins in the plug, enabling current to flow while still being easily separable.

The patent refines the concept in a few ways, with some tweaks larger than others. 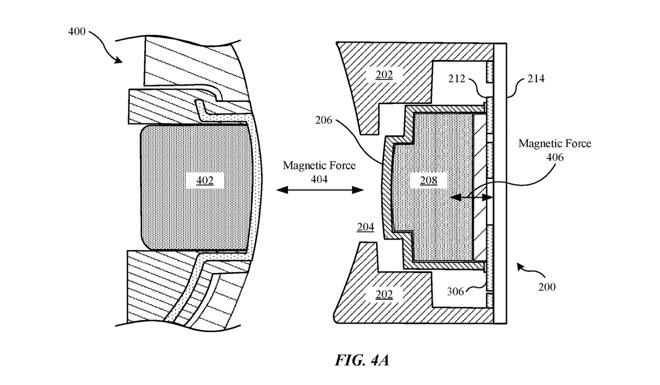 An example of a receiving contact being repositioned by magnetic force.

Across the range of ideas, a common trait is that magnets are used not only to keep the connector in place, but to affect the position of the pins themselves. Rather than pressing the pins into place with force from a spring, Apple suggests magnets can be used to commence and maintain the connection between contacts.

By using a floating contact point that is held in place in the plug with a combination of magnetic force and springs, the contact point can freely move while still staying attached.

Likewise, contacts in the receiving device could be similarly fashioned, able to retract inside the port magnetically for storage. The same contacts can be pulled into place by an external magnetic force, one stronger than the version pulling the contacts into storage positions. 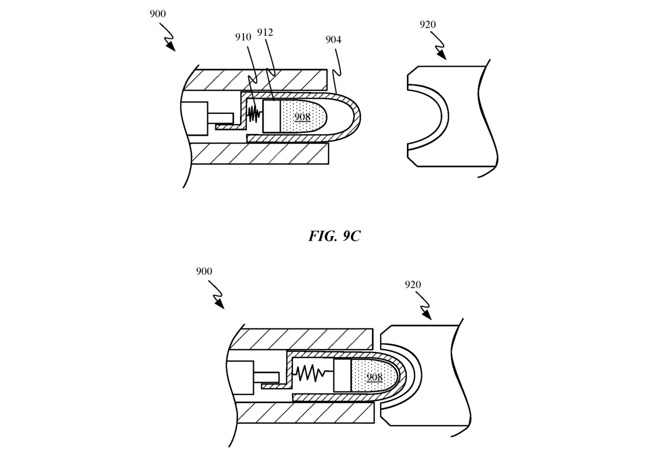 Some of the designs used are similar in concept to the original MagSafe connectors. Images towards the end of the patent suggest the concept can be refined to a different form.

A variant has the floating contact within the connector being held within a domed conductive casing that doesn't move. The contact can move within the casing, and has the potential to send current from itself through the casing at the point of contact with it.

This alternate design also suggests that the receiving connector in the device could be quite shallow and smooth, rather than using pins sticking out from a flat edge. This could allow for the connector to be angled from the device, which can make it easier to use and separate.

More intriguingly, an image for the latter variation seems to suggest it could be used on the base of a thin device, like an iPhone. While there's no guarantee Apple will actually pursue the connector, it does show that the company considered it as a possible addition to the iPhone design.

The patent illustrations also depict what could be an iPhone.

This isn't Apple's first crack at improving connectors used on devices, as it is a topic that has repeatedly surfaced in other filings. This has included ideas such as compressible sheathing for a water-tight seal, and more recently, a way to limit cable fraying.