Future Apple gloves could use ultrasonics to re-implement Force Touch

AppleInsider
Posted: March 4, 2021 4:18PM
in General Discussion
Rather than reintroducing the previous Force Touch where a surface detects pressure, Apple is investigating how wearables such as gloves can turn regular surfaces into touch-sensitive ones, perhaps for Apple AR. 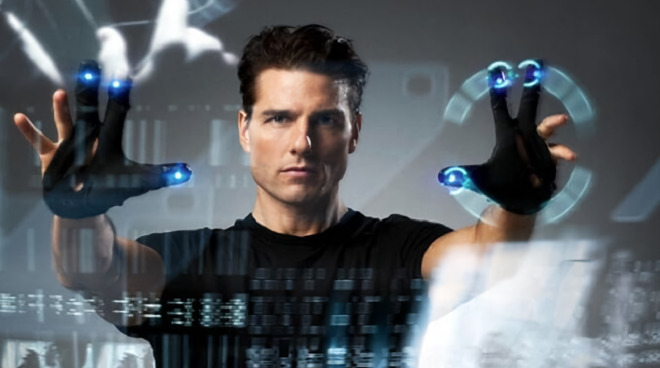 Apple is again researching gloves that, in part, resemble those worn by Tom Cruise in Minority Report

Maybe it didn't help that Apple sometimes called it Force Touch, and sometimes 3D Touch. But whatever the reason, not enough people were even aware that you could press hard on a device to control it.

So Apple ultimately removed Force Touch, and if you knew what it was, you missed having it. It definitely feels like a bad move losing it from Apple Watch and so requiring more taps and swipes to accomplish certain tasks.

Now, however, it's possible that Apple thinks we're more likely to use Force Touch-like pressure, if we put on gloves that are built for it. Apple has previously researched using force-sensitive gloves to create gesture controls, but this is more about registering physical pressure as you press down on a surface.

So "Ultrasonic Force Detection," is a newly-revealed patent application that proposes wearables can use ultrasonics to detect force as you press your fingers down on a surface.

"An amount of force can be determined using time-of-flight (TOF) techniques of one or more ultrasonic waves propagating in the user's body," says the patent application. "In some examples, an electronic device including a transducer can be coupled to a digit, and can transmit ultrasonic waves into the digit."

"As the wave propagates through the thickness of the digit, a reflection of at least a portion of the transmitted wave can occur due to the bone and/or due to reaching the opposite side of the digit (e.g., finger pad)," it continues. "One or more reflections can be measured to determine the amount of force."

So when wearing a glove, pressing fingers down on a surface can be detected and the amount of pressure measured. That can determine whether a touch is a deliberate tap or not.

Although the patent application illustrates, and mostly describes, a glove system, it also covers any other kind of hand- or finger-wearable. "For example, an ultrasonic force detection system can be implemented in a finger cap or finger sleeve," it says, "in a ring, in another form of finger worn device (coupled to a finger via a strap, clamp or any other suitable fastener), or can be coupled directly to the finger (e.g., with a temporary adhesive)."

In each case, there's a measurement of pressure, plus detection of "changes in the overall thickness of [a] finger" as the user presses down. "In some examples, changes in the thickness of a portion of finger... can be used to determine the applied force," says Apple. 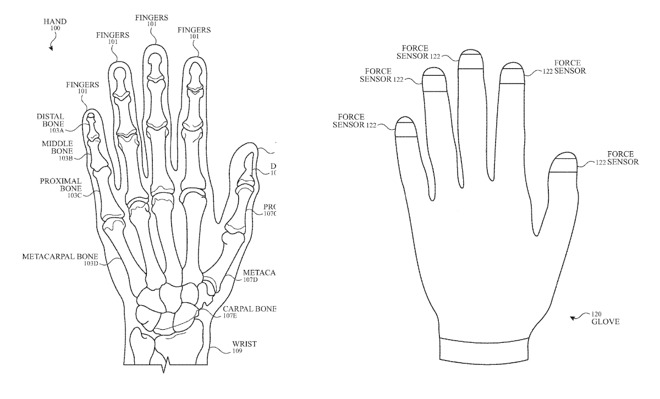 If you wore such Apple Gloves, then you could treat any desk or other surface as one with controls. The pressure applied when pressing down on that surface would be detected and measured, then a system could interpret that as meaning the user wants to press a control.

Such effectively invisible controls on surfaces, blurs the line between reality and Apple AR.

The patent application is credited to eight inventors, including the prolific Paul X. Wang. His most related previous work includes a granted patent for being able to read force measurements from an Apple Pencil user's grip.

Separately, Apple has recently been investigating the use of ultrasonic touch detection to help iPhone screens work better in the rain. It has also researched using ultrasonic sensors to authenticate user voices, and for nearby devices to communicate locally.
Sign In or Register to comment.