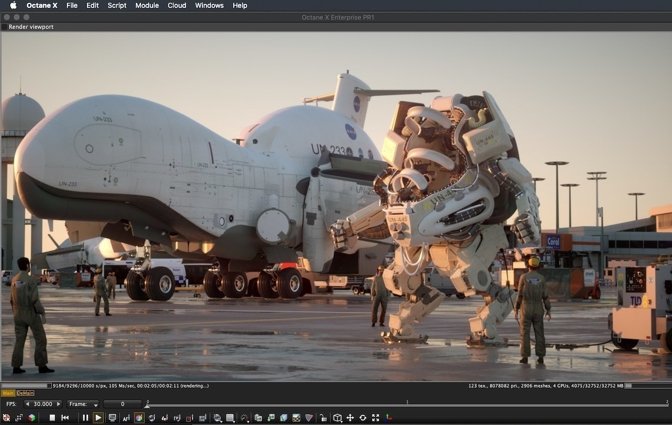 First debuted at WWDC 2019, Octane X is an update on Otoy's OctaneRender that has been rewritten in Metal as part of a collaboration with Apple. A public preview was made available in 2020.

Along with those features, Octane X also supports ACES, OpenColorIO, and deep pixel EXR rendering. It features a node-based material, shader, and scene editor and an advanced AI Denoising system.

"For the past decade, OctaneRender has been democratizing visual effects, leveraging the power of GPU rendering to enable anyone with a creative vision to realize their imagination," said Otoy CEO Jules Urbach. "With Octane, we have seen our users create remarkable films, design new products, publish everyday renders that have transformed the social media landscape, and now, build careers creating blockchain digital art through the RNDR cloud service, which for the first time, will be offered for free to all artists using Octane X on pro Mac systems."

The app requires that a Mac is running macOS Big Sur 11.1 or later and has the latest AMD or Intel integrated graphics.

"Apple has always had a special place in our hearts as the company that made personal and mobile computing widely accessible. We are thrilled to usher in the next generation of creativity with Octane X now available for free for millions of artists across the Apple ecosystem," Urbach said.

The app is available from the Mac App Store for free. More information can be found on Otoy's website.